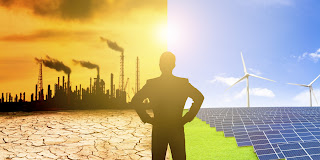 The newly-announced EPA Clean Power Plan has made big waves in the energy industry.  It's recognized as a departure from past statements by President Barack Obama and EPA Administrator Gina McCarthy praising natural gas's role as a bridge fuel to help reduce carbon emissions while shifting to renewable energy.

As such, the energy industry and representatives of states that support it have come out with strong statements against the plan.  However, many other sources, particularly environmental groups, say that the claims that energy industry proponents are making about the new rules, such as higher energy bills, lost jobs, and trillions in lost economic growth, are being severely overstated in an effort to frighten the public.  In that respect, it is remarkably similar to what the industry says about anti-fracking activists and the alarming claims that they make about the impacts of shale development.

Here is a sampling of some of the ongoing response to the Clean Power Plan.

These energy states are among the most vocal opponents of the Clean Power Plan, even as their jurisdictions could see benefits from increased wind, solar or natural gas used in generating U.S. electricity (E&ENews PM, July 24, 2014).

"The idea that the EPA is announcing regulations that all the states have to comply with puts the hair up on the back of the Texas neck," said Cal Jillson, a political science professor at Southern Methodist University in the Dallas area. "Even though it's telling us to continue moving in the direction that we're already moving, it's setting standards that we must meet."


The rule does not actually instruct states to choose some generation sources over others, and promises that no coal-fired power plant will have to be retired before its useful life is over.

But the changed date, along with an incentive program for states to earn credits for renewable installation, has officials convinced they can avoid some gas increases. It also allowed the White House to seek a nationwide 32 percent cut in power plants’ carbon pollution in the final rule, more than the 30 percent proposed last year.

The gas industry is furious. Obama had previously held up gas as a top driver of the United States’ recent emissions reductions, because gas emits as little as half of the carbon dioxide as coal when burned.

And while gas companies are still working to figure out that actual impact of the rule, they aren’t happy with the way the administration presented it.


When politicians propose a new policy, such as Barack Obama’s and Hillary Clinton’s plans to outlaw one third of US CO2 emissions in the next 15 years, it is always worth asking: Has this been tried before? And what happened when it was?

The answer is: a much, much milder version of the Obama-Clinton plan has been tried in Germany—and it has already impoverished millions.

From the Environmental Defense Fund comes the other side of the argument:


The Washington Post reports that Senator Mitch McConnell of Kentucky has already organized a boycott of the Environmental Protection Agency’s Clean Power Plan, even before it’s released. Never mind the fact that Kentucky state officials expect to meet the plan’s requirements to cut pollution from power plants “with relatively little effort.”

In fact, the newspaper’s analysis reveals that most states won’t have trouble meeting the plan’s targets. So, if Sen. McConnell and others are not really standing up for their home states, what’s actually behind the opposition to the Clean Power Plan?

The motives vary, but most opponents of the Clean Power Plan seem united in their belief that solving climate change is either unnecessary or should be very low on the list of national priorities. That’s the only real explanation for their immediate rejection of the only currently available mechanism for limiting climate pollution from its largest source – under a plan that’s flexible, achievable and affordable.

Drivers of the opposition can be broken down into three familiar categories: money, partisanship and ideology.

Then comes this report from CNN's Van Jones:


The clean power plan is a smart approach -- because it is both powerful and flexible. It requires that U.S. power plants reduce their emissions 32% below 2005 levels by 2030. But each state gets to decide how best to do that. They can invest in renewables like solar and wind, switch to natural gas, or simply upgrade coal plants to produce more electricity with lower emissions.

This is smart federal policy-making. President Obama is setting a clear goal, but he is leaving it to the laboratories of democracy to decide how best to get there.

Of course, that fact will not stop the bellyaching from fossil fuel companies and their puppet politicians. Big polluters are already pulling out all the stops, trying to convince you that this plan will somehow doom the republic.

Don't believe the hype. Here are the myths -- and the facts.

And from Media Matters:


EPA Administrator Gina McCarthy: Clean Power Plan Will Cut Average American's Electric Bill By 7% in 2030. In an August 3 blog post on the EPA's website, EPA administrator Gina McCarthy stated: "[T]he Clean Power Plan is projected to cut the average American's monthly electricity bill by 7% in 2030. We'll get these savings by cutting energy waste and beefing up energy efficiency across the board." McCarthy was citing data from the EPA's regulatory analysis of the Clean Power Plan final rule, which estimated an average monthly bill increase of 2.4-2.7 percent in 2020, an average bill decrease of 2.7-3.8 percent in 2025, and an average bill decrease of 7.0-7.7 percent in 2030, when the plan is fully implemented. Additionally, an Obama Administration fact sheet stated that the Clean Power Plan will "[s]ave the average American family nearly $85 on their annual energy bill in 2030, reducing enough energy to power 30 million homes, and save consumers a total of $155 billion from 2020-2030." [EPA.gov, 8/3/15; EPA.gov, August 2015; EPA.gov, accessed 8/4/2015;whitehouse.gov, 8/3/15]