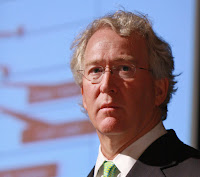 Aubrey McClendon and his latest venture, American Energy Partners, have been in the news a fair amount lately.  Not too much of the news has been positive for the former Chesapeake Energy CEO.

The latest news regarding McClendon and AEP is outlined in separate articles from Bloomberg Business and Fuel Fix.


For Aubrey McClendon, it was the perfect time to tap debt markets: he had parted ways with Chesapeake Energy Corp., energy prices were climbing, and high-yield investors were willing to lend to just about anyone.

That was just over a year ago. A few months after the shale pioneer piled on borrowings to fund his fledgling new empire at American Energy Partners, a plunge in oil and gas prices shattered McClendon’s plans to cut debt through growth, leaving investors in the lurch. A secured loan sold by one of his ventures in the Marcellus shale region has cratered to about 32 cents on the dollar.

“They took on a lot of debt last year with plans to grow at pretty astronomical rates,” said Carin Dehne-Kiley, an analyst with Standard & Poor’s. “With the commodity price downturn, those plans have changed but they still have that debt.”

While the situation seems bleak, McClendon continues to wheel and deal.  Bloomberg reports (click to view the story on Fuel Fix) on a deal he's seeking to drill in Australia, where other international drillers have abandoned projects.  From that Fuel Fix report:

McClendon’s American Energy Partners LP signed a letter of intent and a three-month exclusivity agreement with Armour Energy Ltd. to acquire a 75 percent stake in 21.5 million acres of drilling rights, Brisbane, Australia-based Armour said in a statement on Thursday. Armour rose the most in three years.

Terms of the preliminary deal require American Energy to pay Armour as much as $18 million in signing bonuses and to spend $100 million on oil and natural gas drilling over five years. American Energy also has the option to acquire a 5 percent stake in Armour and a seat on the board of directors, according to the statement.

Work on the project should begin by May, Armour Chief Executive Officer Robbert de Weijer said in a phone interview. Separately, the company is seeking buyers for a stake in 7.8 million acres it holds in the same region, he said. Armour soared 49 percent to 7 Australian cents in Sydney.

What will happen next with McClendon?  Your guess is as good as mine.