UPDATED: Injection Wells Ruled Out as Source of Vienna Township Spill For Now 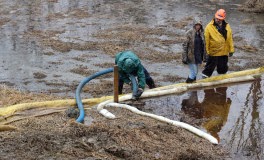 
Five injection wells near Youngstown, OH, that were thought to be the source of a roughly 2,000 gallon spill of oil and other waste into a pond and wetland have for now been ruled out, with state investigators attributing the spill to winter run-off from a nearby salvage yard. The injection wells, located in Vienna Township, about 14 miles north of Youngstown in Trumbull County, are operated by Kleese Development Associates.


The Ohio Department of Natural Resources has ordered five injection wells operated by Kleese Development Associates, Warren, to cease operations after it found the company is responsible for contamination of a nearby pond and wetland.

ODNR oil and gas chief Richard Simmers issued the order April 3, one day after the agency became aware of the spill, according to documents. Kleese must also remediate any contamination at the site, the regulatory agency said.

Kleese uses a single surface facility at 5061 Warren-Sharon Road for all five of its Vienna Township wells, according to the ODNR report. The operation was built to accommodate two wells initially, but was expanded in 2012 with ODNR’s authorization.

The company told media outlets before the ODNR order that it had voluntarily shut down its operations after the spill was discovered. Kleese issued a statement late Monday saying it’s “launching an internal review of KDA protocols to ensure that we have the right processes in place to promote environmental stewardship.”

John Hopkinson of 884 Sodom Hutchings Road, who owns a pond near the Kleese wells, notified the Ohio Environmental Protection Agency April 1 of the spill and lodged a formal complaint, according to a pollution incident report. He said that he first discovered the contamination March 25 as the ice melted, reporting a “scum-type material on his pond” that had a “petroleum type odor.”