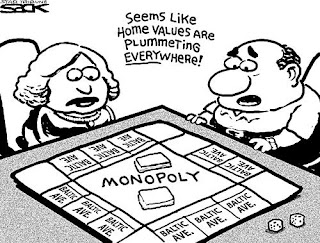 From Energy Bulletin:One fact ought to tell you all you need to know about the risks faced by homeowners signing leases for natural gas drilling on their property: Wells Fargo & Company, both the largest home mortgage lender in the United States and a major lender to the country's second largest producer of natural gas, Chesapeake Energy Corp., refuses to make home loans for properties encumbered with natural gas drilling leases.

This salient fact comes from an article (PDF) written for the New York State Bar Association Journal by attorney Elisabeth N. Radow. Written in the form of an even-tempered legal brief, Radow relates one astounding finding after another. Perhaps most relevant to homeowners who either have signed drilling leases or who may be asked to sign them in the future is this: "Signing a gas lease without lender consent is likely to constitute a mortgage default." You read that right. Default.
Her conclusion stems from something which most homeowners probably don't even realize: Standard residential mortgages prohibit:

the use, disposal, storage, or release of any hazardous substances on, under or about the mortgaged property. In mortgages, hazardous substances include gasoline, kerosene, other flammable or toxic petroleum products, volatile solvents, toxic pesticides and herbicides, materials containing asbestos or formaldehyde and radioactive materials.

Of course, homeowners often have and use some of the above-mentioned materials. But the lenders may invoke their rights should industrial-sized activities such as hydraulic fracturing or fracking occur. Fracking, a process often associated with natural gas drilling, utilizes a cocktail of hazardous chemicals mixed with water. Millions of gallons of the mixture are pumped under high pressure into each well to fracture deep shale formations and thereby release the embedded natural gas found there. Beyond this, homeowners with mortgages are prohibited from violating any environmental laws, federal, state or local. Can they always count on drillers to observe those laws?


Read the rest of the article here, including this interesting concluding point:

Now, we come to who will ultimately pay for any cleanup on abandoned, underinsured properties contaminated and otherwise made uninhabitable or at least, undersirable. Perhaps you've already figured out that it will be in almost all cases U.S. taxpayers who now own the two largest mortgage companies in the country, Fannie Mae and Freddie Mac. When these mortgage giants finally take possession of all the contaminated and impaired properties, they will be obliged to clean them up and simultaneously bear the losses in the value of the mortgages issued on those properties.
In this way, the average citizen will be subsidizing the natural gas industry by bearing the costs associated with devalued property and hazardous waste cleanup. When all of this starts happening in a big way, you can count on those in charge saying that nobody saw it coming.