Utica Activity Has Slowed But Not Stopped in Columbiana County 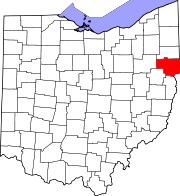 
To date, there are 130 Utica shale wells permitted in the county since 2011. Of those, 52 wells are already producing and four are currently in the process of being drilled, according to OOGA.

The Ohio Department of Natural Resources (ODNR) has approved permits for more than 20 wells in the county this year alone, according to their website, oilandgas.ohiodnr.gov shale.

Three of the wells being drilled now are on property owned by Firestone Homestead LLC, with one located in the city of Columbiana. The others are located in Fairfield Township.

Chadsey said there are Utica wells in 14 townships in the county, and according to OOGA, most are located in Franklin, Hanover and Fairfield townships.