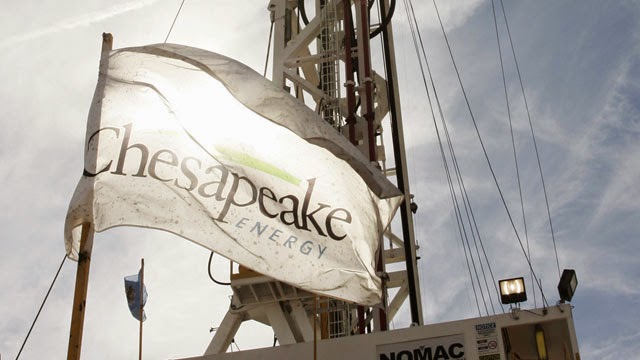 From a Chesapeake Energy news release:

OKLAHOMA CITY--(BUSINESS WIRE)--Feb. 25, 2015-- Chesapeake Energy Corporation (NYSE:CHK) today reported financial and operational results for the 2014 full year and fourth quarter and announced details of its 2015 Outlook and capital expenditure program. Highlights include: Doug Lawler, Chesapeake’s Chief Executive Officer, said, “2014 was a year of accomplishments for Chesapeake. Because of these accomplishments and the progress we have made as a company in 2014, Chesapeake is well positioned to remain strong and flexible in 2015. We have taken and continue to take appropriate steps not only to weather the current difficult commodity price environment we face today, but to thrive in it. Chesapeake became a much stronger company in 2014, and we are looking forward to becoming even stronger in 2015.”

Chesapeake is budgeting total capital expenditures (including capitalized interest) of $4.0 – $4.5 billion for 2015. Using the midpoint of the range, this represents a 26% reduction from the company's 2014 capital expenditures before acquisitions of $5.8 billion, and a 37% reduction from the company’s 2014 total capital expenditures of approximately $6.7 billion (reconciled in the "Capital Spending and Cost Overview" section below). The company is targeting 2015 production of 235 – 240 million barrels of oil equivalent (mmboe), or average daily production of 645 – 655 thousand barrels of oil equivalent (mboe), which represents 3 – 5% production growth after adjusting for 2014 asset sales. Of the 2015 projected production, approximately 39 – 40 mmboe is estimated to be crude oil, 1,035 – 1,055 billion cubic feet (bcf) natural gas and 23 – 24 mmboe natural gas liquids (NGL).

Click here to read the rest of the release.