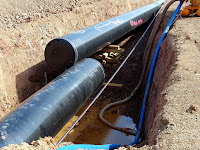 
The company behind a proposed natural gas pipeline across northern Ohio is against rerouting the $2 billion Nexus Pipeline around the Akron-Canton area.

In a report filed with a federal agency, Texas-based Nexus Gas Transmission LLC said the proposal by the city of Green to move about 103 miles of the pipeline further south into less-crowded rural areas of Stark and Wayne counties was not preferred.

The Green proposal is “not considered to be a reasonable alternative to the proposed route,” the company said in a 94-page preliminary report filed with the Federal Energy Regulatory Commission.

It said the Green alternative would take the pipeline farther away from potential customers in northern Ohio, would cause a a one-year delay in getting the pipeline built, would cost an additional $28 million and would require more construction with more environmental impacts. That’s because lengthy laterals would have to be built off the pipeline to serve customers and because the rerouted line would be 10 miles longer, the company said.

You can keep up with the progress of the pipeline project here.