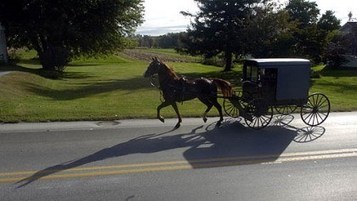 ST. CLAIRSVILLE, Ohio — Amish farmers in this community who eschew electricity and most technology are among landowners capitalizing on a new financial trend in the United States energy boom: selling decades of future oil and natural gas royalties for an immediate pile of cash.
Gulfport Energy Corp., Chesapeake Energy Corp., Anadarko Petroleum Corp. and others have spent billions developing oil and gas reserves on land in Ohio’s Utica shale formation — often by agreeing to give landowners years of royalties, or a cut of future production, in exchange for the right to drill on their land.
Some Amish, traditionalist Christians numbering about 280,000 across the U.S., are sitting on prime drilling land in eastern Ohio, but many say the rapid development is encroaching on their pastoral way of life.
Already this year, several oil trucks have been involved in fatal collisions with Amish horse-drawn buggies on the region’s narrow and winding roads.