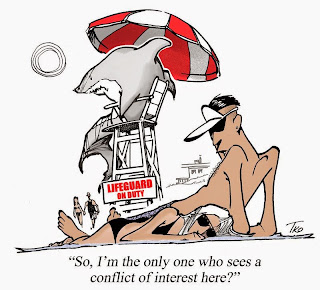 Last week we mentioned a new study which concluded that shale drilling was the possible cause of chemicals found in some Pennsylvania water wells.

The study was initially sent to several media outlets with a statement that the authors had no conflict of interest to declare.  After the story was picked up and reported, that statement was amended.

From Energy in Depth:


Upon learning that researchers of a recent study, which alleged a link between Marcellus Shale development and groundwater contamination, failed to disclose a significant conflict of interest, the Associated Press today responded by issuing a correction to its coverage.  As the Associated Press writes,

“In a story May 4, The Associated Press reported on research that found drilling fluids likely leaked into a drinking water supply in Pennsylvania. The story should have noted that one of the study’s authors, Garth T. Llewellyn, was a consultant for affected homeowners who sued the driller. That information was not included on a pre-publication version of the study provided to reporters by the journal Proceedings of the National Academy of Sciences, but it was later added to the published version.” (emphasis added)

The embargoed copy of the report, which was shared widely with reporters on Thursday ahead of its May 4th release, stated in the bottom right hand corner: “The authors declare no conflict of interest.”

Yet, when the study was actually published, that line was replaced with this: “Conflict of interest statement: G.T.L. and Appalachia Consulting provided litigation support and environmental consulting services to the impacted households.”