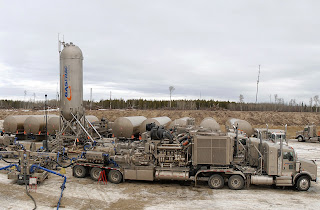 From Seeking Alpha, here is a portion of an earnings call by EV Energy Partners:


I had also promised to provide an update on the Nettles well that we drilled late last year in the volatile oil window in Tuscarawas County, acreage in the Utica. Each section there contains an estimated 30 million or over 30 million barrels of oil in plays. As a reminder, the Nettles well was drilled and completed to test a theory that the water which is used in drilling or completion fluid causes risk or damage which in turn reduces well productivity. This phenomenon was theorized to have a more significant impact in the volatile oil window as a result of the complex fluid flow mechanics, specifically the well molecules about a 1,000 times larger than a gas molecule.

Recognizing it was going to be an expensive test well, EnerVest solicited participation from eight industry partners to share the cost and their technical expertise. The Nettles well was completed in December last year with a liquid hydrocarbon fluid; 75% liquid butane and 25% mineral oil. The initial results were encouraging with production rights similar to those of the Parker well that Chesapeake drilled last year.

However after 90 days of production, the nettles well production is about half of that of the Parker well. We are continuing to perform additional testing on the Nettles well and in addition Chesapeake plans to drill about six more well in the area. We will beat participants in most of those well and will continue to determine the best completion methods that will maximize value in that window.

We clearly have work left to do in the volatile oil window to determine its economic potential, but are separately making progress working toward a drilling joint venture to provide the capital for drilling a portion of our operated Utica wet gas window acreage. We met with a number of potential investors and are moving forward in that process. Unlike the overwhelmingly large majority of basins in the U.S. in which a rate of return in excess of 20% on CapEx can’t be achieved, we can exceed that return in the Utica and EVEP can also benefit from its share of the carved out 7.5% override.

In summary, we look forward to closing on the UEO sale, which will allow us to play offence again in what we expect to be an active acquisition market going forward. Some upstream MLPs probably won’t be able to take advantage of the acquisition market as it recovers. We will continue to focus significant efforts on reducing drilling and completion, lease operating and G&A costs and in generating value of our Utica and Eagle Ford acreage positions.