The Bureau of Land Management (BLM) conducted a competitive online auction today for federal minerals on 191 acres located in the Wayne National Forest (WNF). The combined sale of this acreage – all of which is located in Monroe  County, Ohio — totaled $192,023.84, bringing the grand total for the three WNF lease sales thus far to just under $7 million. That grand total only accounts for five percent of the potential acreage available to lease in WNF.
The state of Ohio will receive approximately 25 percent of today’s sale, and each county with WNF acreage will also receive a share of the proceeds.  This is certainly good news for the people who live and work in Monroe County, as Monroe County Commissioner Mick Schumacher recently told the Times Leader,

“The money goes to the county to be divided. The school district gets 68 percent, and the rest is to be divided between the townships, local governments and levies. This is only initial sales, not royalties.”

But it’s not just the direct revenue from WNF lease sales and royalty payments that are having significant impacts. The real potential economic driver going forward is access to larger private units that will now be available for exploration. Previously, some private minerals and lands adjacent to the public land leased today were held hostage because WNF is a non-contiguous patchwork of federal and private lands and minerals weaved together, which is problematic for economic oil and natural gas development. Thanks to this recent lease sale, more exploration on adjacent private lands can be developed, and with that comes significant tax benefits from property taxes paid on production. As you can see below, Monroe County has watched its property taxes from production skyrocket since shale development began. In 2015 the county collected over $3.4 million. 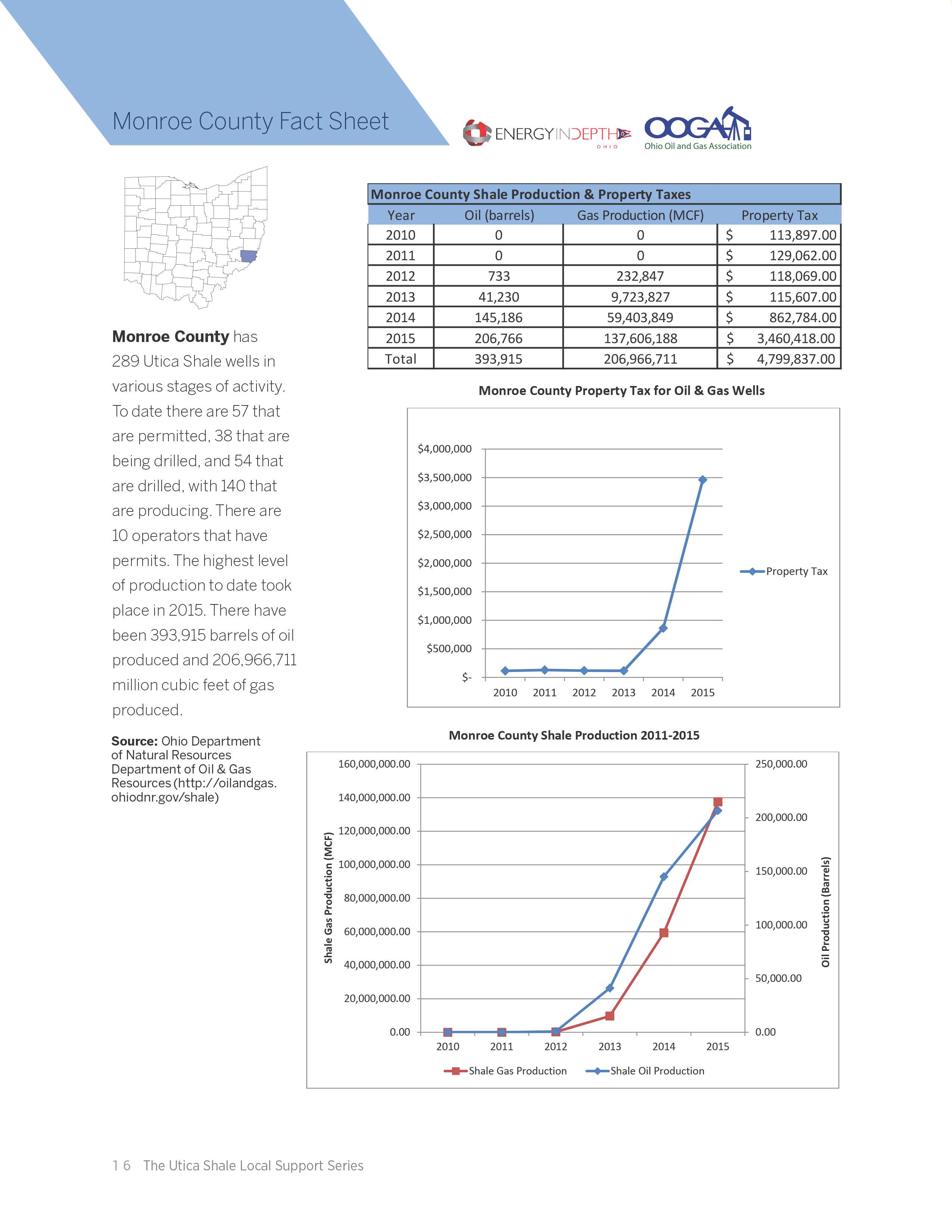 With 37,904 acres yet to be leased in the Wayne through competitive online auction sales, WNF leasing and development are going to provide tremendous benefits for nearby communities in the coming years — especially if local schools near Ohio are any indicator.
Local schools see big benefits
The oil and gas industry has truly been transformational for children in Appalachia. Monroe County schools are reporting that revenue from the WNF lease sales combined with taxes from oil and natural gas development has enabled them to have more resources available for students.  This added funding has helped curtail the recent trend of students transferring to schools that have traditionally had more resources available.  As Beallsville High School Head Football Coach Larry Deem recently said,

“It’s a step in the right direction, and hopefully the kids are starting to see it, too. We will have what we are supposed to have (enrollment wise). As of right now, this is the first year we don’t have any eighth graders open-enrolled out of Beallsville for the first time since I’ve been here.” (Emphasis added)

To put the significance of this into perspective, it’s important to understand the school has been in dire need of funding to add and improve resources. For instance, the Beallsville High School football team has been using a two-room trailer that has only one restroom,  no hot water and a leaky roof as its locker room. Thanks to local oil and gas leasing and development, including in WNF revenue, the school is now able to make improvements. As Beallsville Superintendent Jeffrey Greenley recently reported to the Intelligencer,

“There is a legitimate business reason to invest in our campuses. Every year we lose 102 students to Barnesville, and in 2016 we also lost another 102 to Shadyside. We receive $6,000 per student, and if I keep 50 kids from leaving the district for three years, we make our full investment back. I don’t think they’re going to come back, but if I can keep them from going there in the first place is the goal. … We want to compete for our kids, and we have to invest in these programs to keep them.”

Greenley reported that one school in his district has been able to spend $948,000 on academic materials just within the last 15 months, with plans to spend an additional $200,000, thanks to revenue from oil and gas.
But Beallsville is not the only school district in the region that has benefited. Thanks to property taxes paid on production combined with proceeds from the mineral sales in WNF, the Switzerland of Ohio Local School District recently made a $700,000 improvement to their athletic field, replacing grass with artificial turf. This is a repair that should last 15 years before it needs replaced.  In fact, all three schools in the district are planning to make improvements to their athletic complexes, including their softball and baseball fields, all funded exclusively by oil and gas money.
In Monroe County particularly, gaining access to these federal minerals is vital, which is why the local schools have overwhelmingly supported the leasing of federal minerals. This is just one more example of many of how disconnected fringe environmental activists really are out of touch with the people who live in work in these communities. The fact is, fracking is positively changing lives and lifting communities and schools in Appalachia.