Columbus Business First just released tax data showing that Utica Shale producing counties have the highest income growth in Ohio. And guess which county in Ohio has the highest income growth? Monroe County, home of the best natural gas producing wells in the state. The new report highlights similar reports over the past few years showing a correlation between oil and natural gas drilling and production with and the personal income growth of residents who live and work in those counties.
The report found that from 2010 to 2015 tax filers in Monroe County reported more than $200,000 in adjusted gross income, representing a staggering 855 percent jump. In fact the top six high-income growth counties are all squarely located in the core of Utica Shale development.  Recall that it was only four years ago that the Akron Beacon Journal reported, “Shale has produced 630 new millionaires in two Ohio counties.” 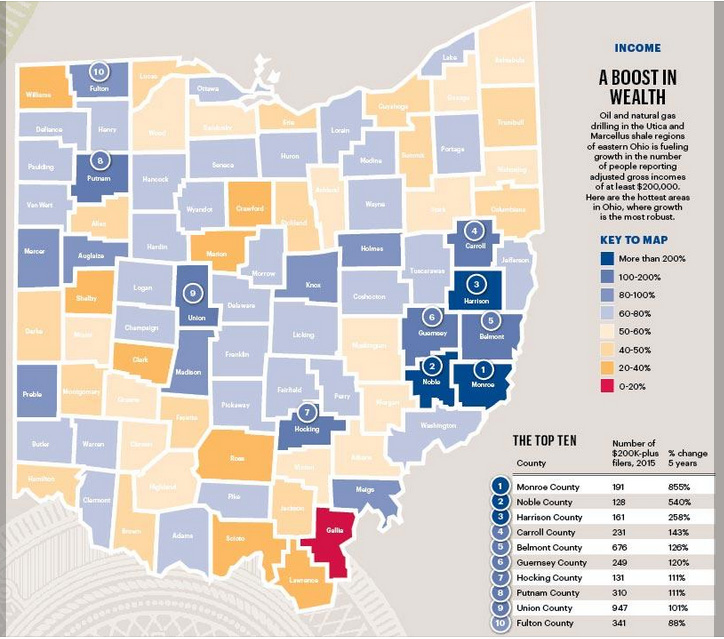 Source: Columbus Business First
The top six counties reporting the highest number of $200,000-plus tax filers were Monroe, Noble, Harrison, Carroll, Belmont and Guernsey. In terms of permits and overall statewide production of natural gas, Carroll County still leads the pack with the most 525 and highest overall statewide production of natural gas, and Belmont County has the second highest number of permits (488), with Harrison (391), Noble (213), Monroe (342), and Guernsey (203) rounding out the top six natural gas producing counties. So, there appears to be a direct connection between drilling and production and personal income for residents in those counties.
As Columbus Business First reported, “That’s not a typo.”
Another piece of evidence linking natural gas production to income growth is the reality that these same counties have realized tremendous tax revenues, thanks to property taxes paid by operators on production of oil and gas. As EID reported earlier this year, eastern Ohio has realized over $45 million, with Monroe County realizing a 340 percent increase in tax revenue.
Still not convinced? Also this week, WTOV 9 reported major upgrades to Switzerland Local Schools in Monroe County, stating,

“Each high school is participating in a campus improvement project thanks to the school board and oil and gas money.”

This is all very good news and it highlights how vital oil and natural gas development has been for Appalachia, which traditionally has included some of the poorest counties in the state.