In a classic case of irony, out-of-state group Earthworks sent a campaign organizer 2,569 miles (no doubt using oil and gas) to Marietta, Ohio, last week to rally a whopping 15 anti-fracking activist for the “huge” anti-fracking Ohio River Rising Rally & March. As EID has highlighted, out-of-state fringe environmental activist are desperately trying anything they can to rally Ohioans to oppose oil and gas development, yet each time they are failing miserably. Local elected leaders have had just about enough of out-of-state and out-of-touch activist coming to Ohio to tell them what to do, as Washington County Commissioner and Marietta resident Ron Feathers told EID,

“We don’t need these national groups coming in from out of state, traveling 2,500 miles to try to dictate how we manage our natural resources in Ohio. They have no vested interest here. They are not paying taxes, and they are not supporting our schools or local fire department. I don’t tell people in California how to eat and they shouldn’t be telling me how to use our minerals.”

Ethan Buckner, professional staff and energy campaigner for Earthworks, said to a crowd of 15 in Marietta on July 29: “I’m from Oakland, California and happy to be here.” To put into perspective just how far Buckner traveled (using fossil fuels, of course) take a look at this map:

Earthworks — one of the most aggressive “ban fracking” groups nationwide — posted this picture on social media without any mention to the fact that those holding signs and highlighted in the photo were the only attendees. 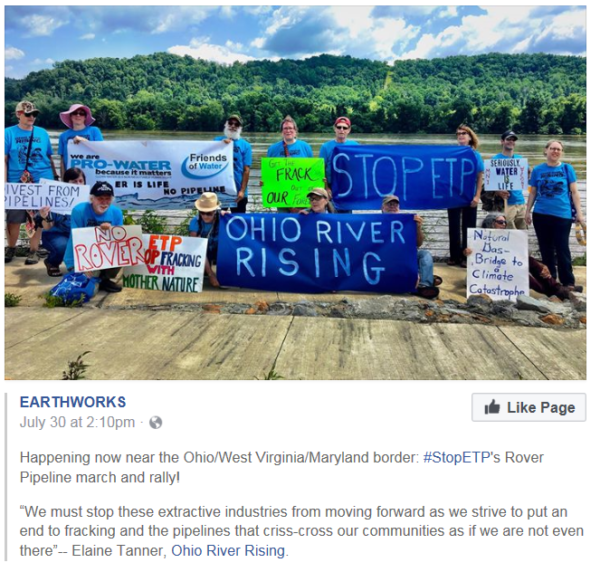 However, much to their dismay, the people who actually live and work in Ohio are wise to their shenanigans, as evidence by the fact that they could only muster 15 people attending their “huge” rally. Monroe County Commissioner Mick Schumacher echoed Commissioner Feather’s statement and told EID,

“We know that national groups have been behind these so-called action camps to ban fracking in the Wayne National Forest and the small percentage of people from Ohio who joined them have come into our county from Athens, which is ironic considering Athens County will receive money from leasing of minerals in our county.”

Commissioner Schumacher is referencing how Athens County receives a cut of the Wayne National Forest sale proceeds taking place in his county. Areas such as Monroe County have dealt with these funding shortfalls for a very long time, which is why there was broad bipartisan support for leasing of federal minerals throughout the extensive review to lease in the Wayne. Washington County also strongly supported leasing the Wayne as well — and it’s now obvious why, as counties in Appalachia have received hundreds of thousands from just one Wayne minerals auction.
Regardless of how much money and influence out-of-state and out-of-touch groups try to impose on Ohians, the people who actually live and work here have become wise to their antics, as this latest anti-fracking disappointment in Marietta clearly demonstrates.