A group of Ohio legislators and their staffs attended a “Natural Gas Lifecycle Tour” last week that illustrated the tremendous positive economic impact Utica Shale development is making across each segment of the Buckeye State’s natural gas industry. Thanks to accommodations by companies like Ascent Resources, MarkWest and Dynegy, the tour included a first-hand look at a well pad, midstream operations and a natural gas power plant, comprehensively illustrating the importance of pipelines for takeaway capacity, the need for end users of natural gas and the significant Utica Shale investment that is creating billions of dollars in economic activity and tax revenue. 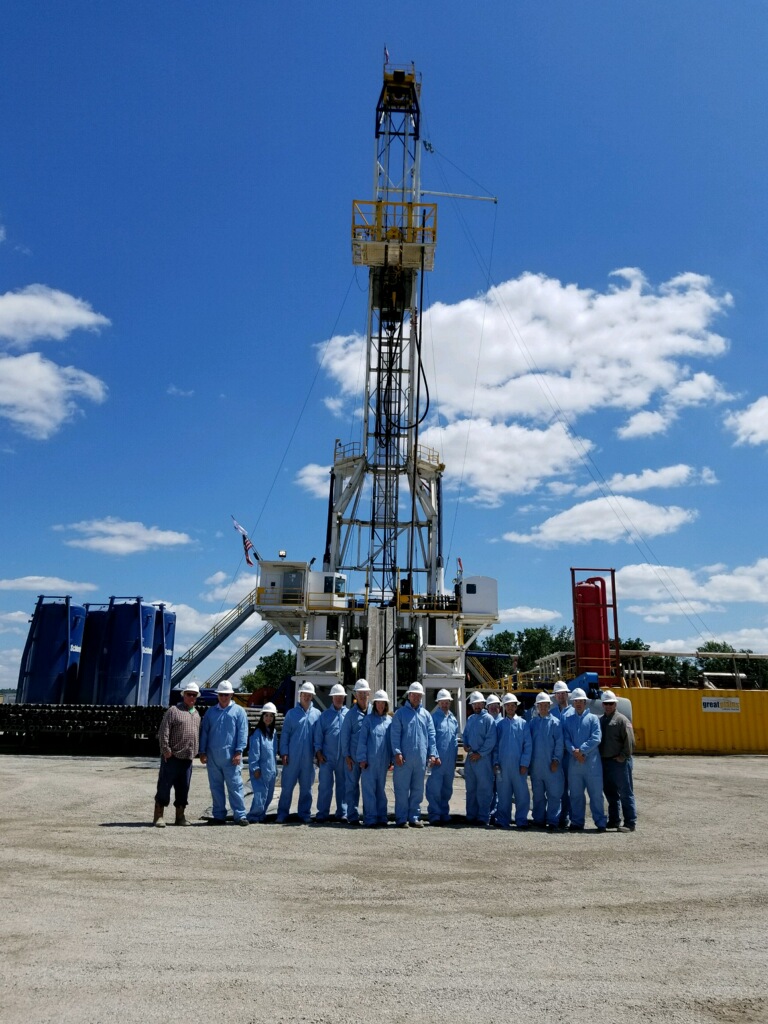 “These tours and informational meetings were very important to the process legislatively because legislators get to go on the site, on the tours hands-on so we can see first-hand what’s going on here in Ohio as far as energy and our gas production. It’s certainly valuable; when we’re in committees we’re talking about issues that concern energy in Ohio. And, so I’ve been here first-hand, met with the folks got to know them, know the operation and I just can’t say enough about it.”

Last week’s tour kicks off a series of events geared at educating the public about how natural gas is quite literally powering Ohio’s economy and providing a tremendous economic windfall. In support of those efforts, Energy In Depth has released a new infographic, “Natural Gas Lifecycle: By The Numbers,” showing that when the upstream, midstream and downstream segments are combined, the statewide investment already made and estimated to come within the next few years — in conjunction with taxes generated from those investments — are simply staggering. 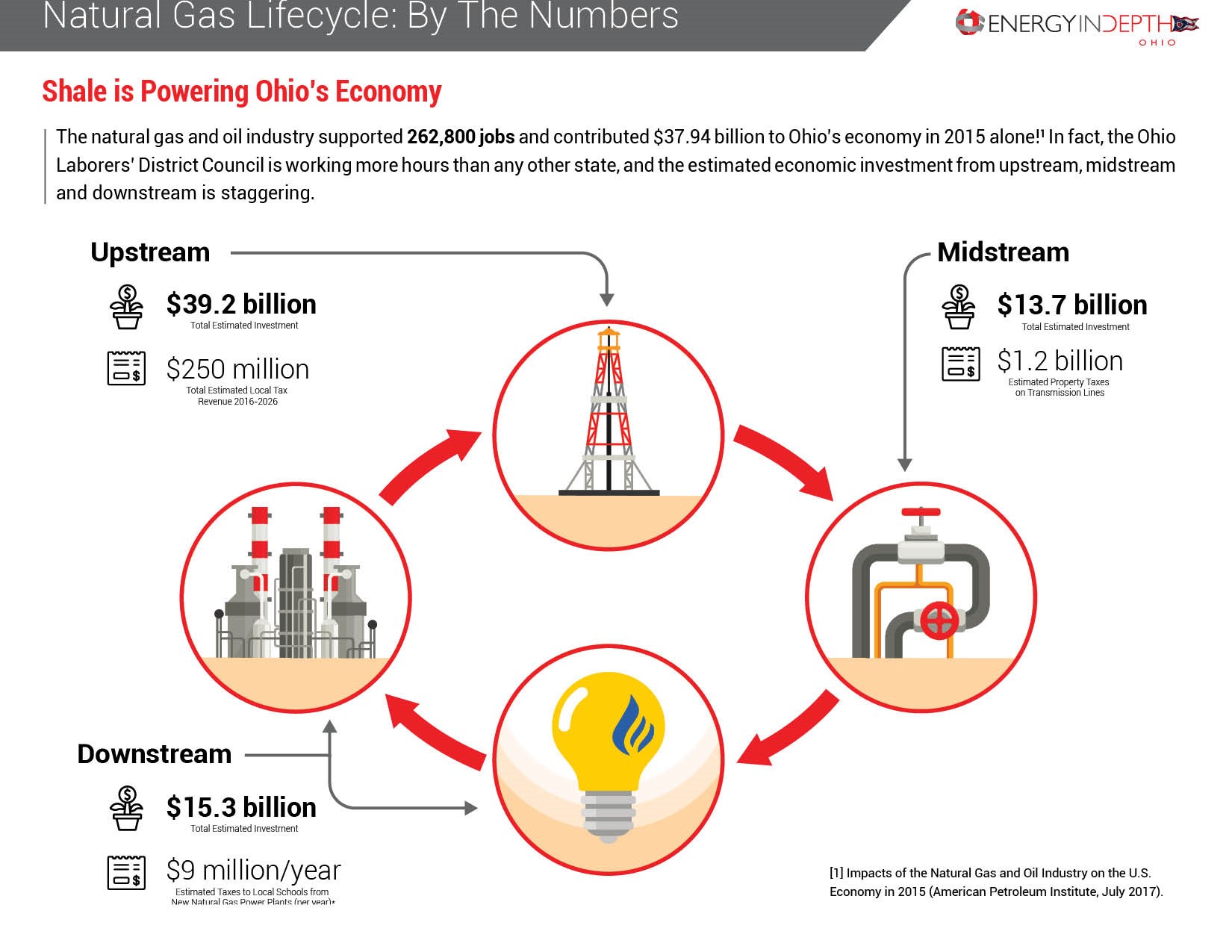 Here’s some of what was seen and talked about on the tour:
Upstream
The tour included a visit to an Ascent Resources well pad, where attendees learned about the new technology and techniques that are helping Utica Shale operators become increasingly efficient. In addition to detailing safety and environmental measures taken during upstream activities, there was also an emphasis on the incredible boon to the economy that continues to occur in areas where production is taking place.
As Cleveland State University recently reported, fracking has directly poured over $39 billion into Ohio’s economy. And a recent EID report found that property taxes paid on production of oil and gas has meant $45.8 million in direct local tax payments, with another $250 million slated over the next 10 years. Additionally, six out of the 10 highest income growth counties in Ohio are squarely located in the heart of Utica Shale production, which is not a coincidence.
Here is a breakdown of those numbers: 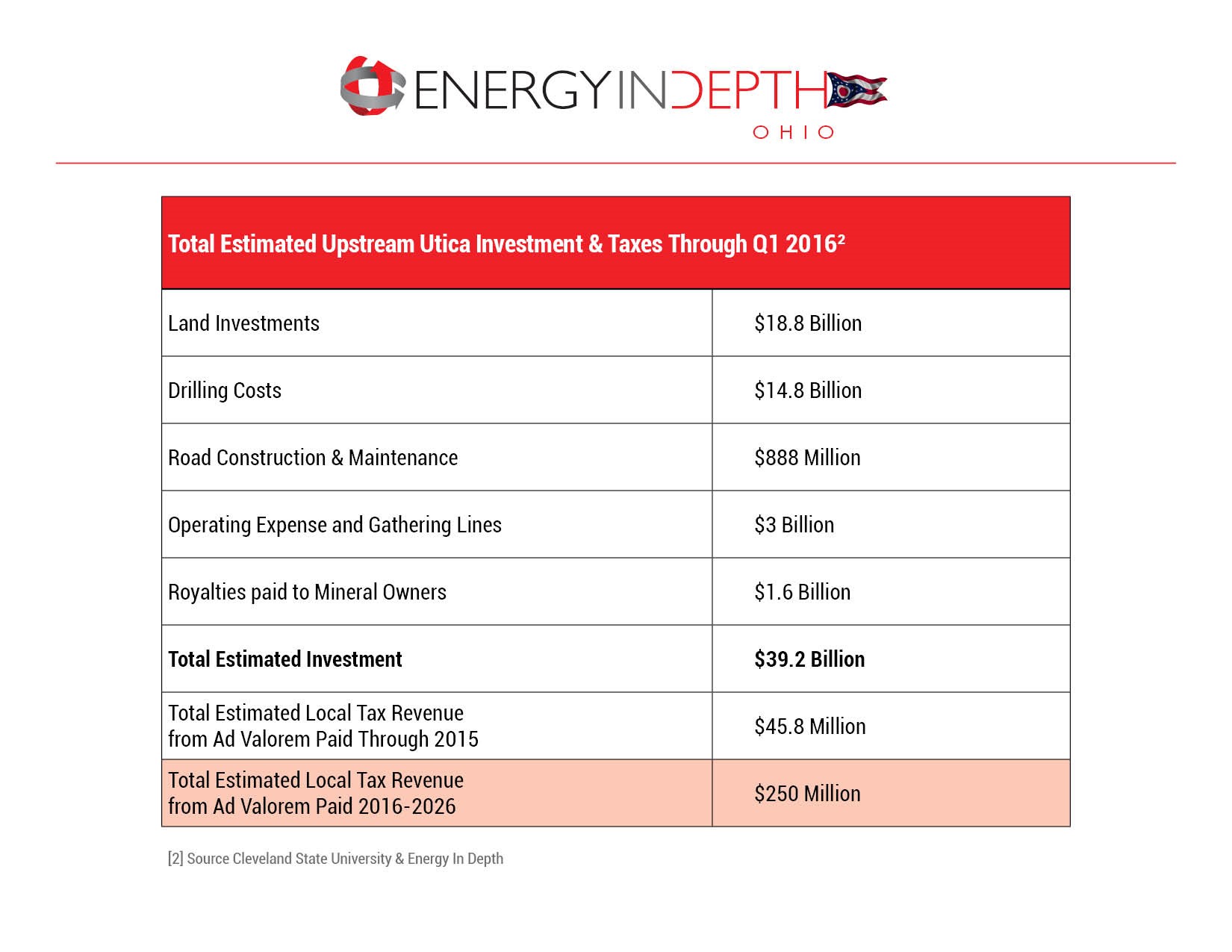 Newly elected Ohio Sen. Frank Hoagland was one of the legislators touring the site. According to Sen. Hoagland,

“People don’t understand how much work is involved with gas and oil, how important it is to not only us as a local community, but on a national level and to the future of the global society. I believe we are extremely fortunate in this area, to have this opportunity.”

Here’s a quick video of his remarks after touring the well pad and learning about Ascent Resource’s operations:

One observation made along the tour route was the large number of companies that support the operation of a well pad. To that point, a recent American Petroleum Institute-Ohio report finds the oil and natural gas industry supported 262,800 jobs in 2015 alone! However, with the continued upstream activity occurring, Ohio is in dire need of takeaway capacity made possible through pipeline infrastructure, which leads us to Ohio’s midstream development update.
Midstream
After the group toured the Ascent Resources well pad, the “Natural Gas Lifecycle Tour” moved to MarkWest, the largest full-service midstream system in the heart of the Utica Shale. MarkWest representatives explained what happens after oil and natural gas is produced from the wellhead and spoke at length about the importance of pipelines and end-uses (downstream), such as the proposed PTT Global Chemical plant.
Ohio’s Utica Shale produces a tremendous amount of natural gas liquids (NGL), such as ethane, propane, butane, isobutane and pentane.  Ethane in particular was a major topic of discussion, as ethane from the Utica Shale is currently primarily blended into pipeline gas. In other words, it’s a drag to both operators and midstream companies, as the majority of the ethane is not being used. Fortunately, this could soon change, as ethane crackers are slated to come online, allowing ethane to be cracked to produce ethylene, the feedstock for chemical manufacturing of over 6,000 consumer products.
To date, midstream companies such as MarkWest, in conjunction with interstate transmission lines in various stages of development, have meant an estimated $13.7 billion to Ohioans.  As EID recently reported, tax revenues associated with the five major pipeline projects will yield at least $1.2 billion to Ohio’s local communities and schools. Here’s a snapshot of the midstream estimates in Ohio: 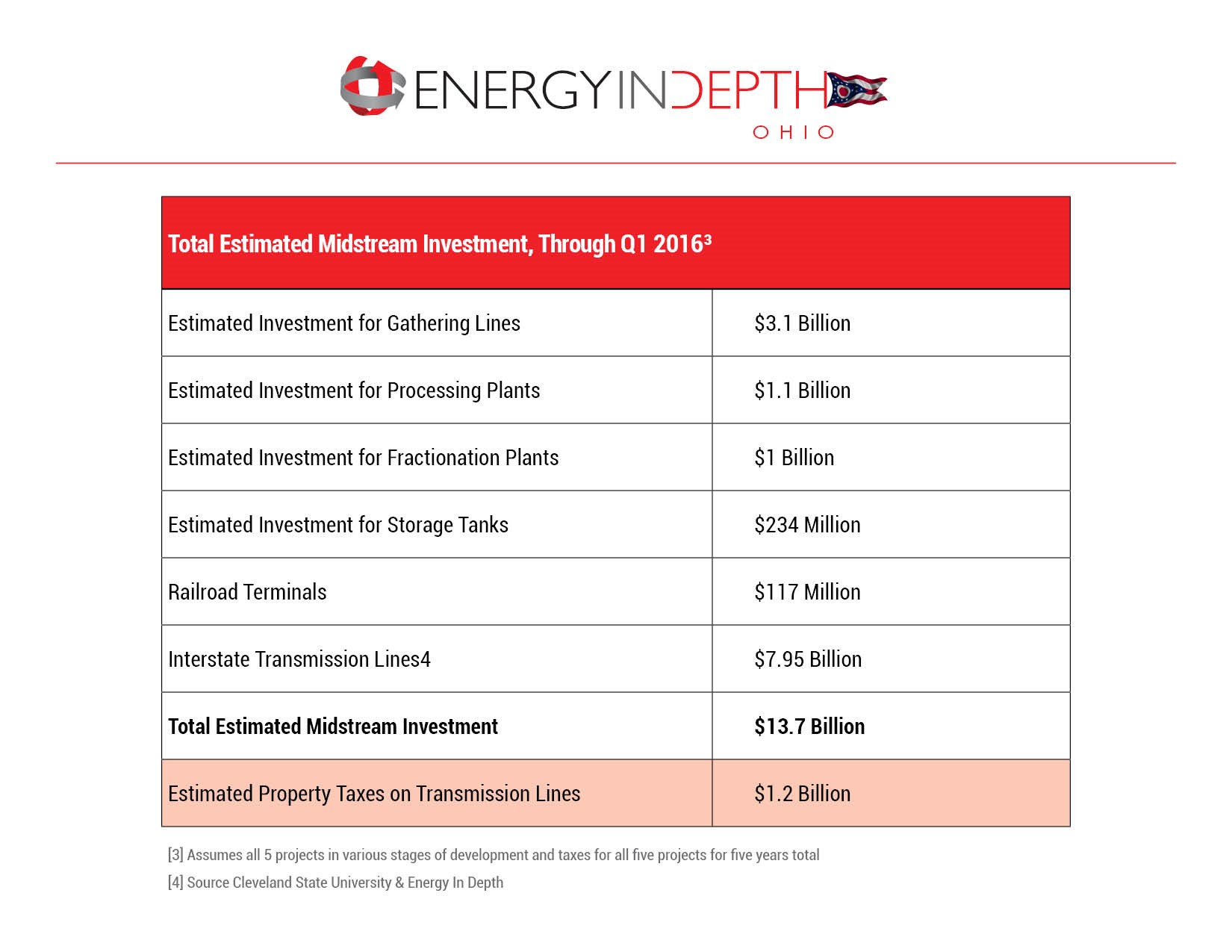 “As a result they have been able to give pay raises to teachers and a new HVAC system. The school district we are in (K-12), by the time they hit kindergarten through their senior year we have paid about $74,000/child.”

Dynegy’s Beverly plant is also one of the cleanest in the state, emitting 50 percent less CO2 than other fuel sources and essentially no particulate matter.
Ohio State Rep. Andy Thompson was excited to host his Ohio Statehouse colleagues in his home district, as he reported to EID:

“It’s excellent to be touring the Dynegy plant today here, just north of Beverly, Ohio. It’s in my district, it’s contributing a lot to the local economy charitably, but also because the employment that it provides. It’s a fantastically safe plant, has a tremendous safety record over the last 16 or 17 years. So, they are taking the product from the Utica shale and turning it into inexpensive electricity, adding to the reliability of the grid. They are also cost effective in the long term for the economic development of Southeast Ohio and Ohio, generally. They are supplying the grid and providing reliability and the ability to start up the grid should there be any kind of catastrophic shutdown. So, they play a vitally important role in our economy and our energy security and it’s good for economic development.”

In addition to the local gas fueling Dynegy’s plant in Beverly, the prolific natural gas production made possible by fracking has spurred investment of new combined-cycle natural gas-fired power plants all across the state.  As Rep. Thompson explained,

“Ohio is blessed with abundant, low-cost shale gas. In fact, Utica shale gas is the lowest cost gas in the entire country.”

To fully understand just how substantial downstream investments and tax revenues are estimated to be, take a look at this snapshot: 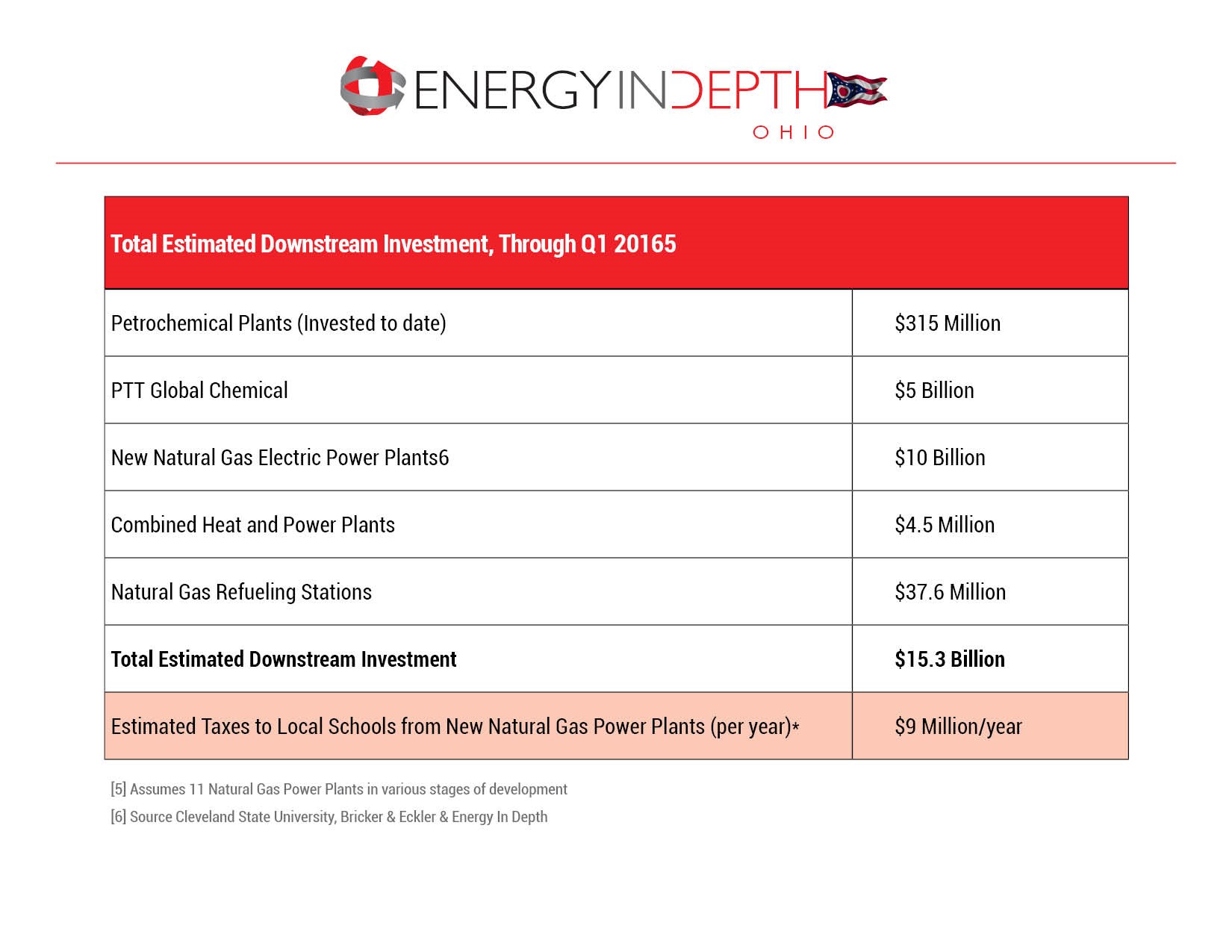 Many Ohioans believe a recent uptick in oil and natural gas investment is a signal of more good things to come, and drilling has started to pick up. Guy Coviello from the Youngstown Regional Chamber of Commerce recently stated,

“It’s a good indicator of what’s happened with the resurgence in the shale industry.”

It was made abundantly clear on the “Natural Gas Lifecycle Tour” that natural gas produced from eastern and southeastern Ohio has spurred investment throughout the state, and not just in areas where exploration and production are taking place.  A prime example is Oregon, Ohio. Despite the fact there is no Utica Shale development going on there, the community has benefited from the recent construction of a natural gas-fired power plant, and a second plant appears to be in the works. More importantly, every Ohio electricity consumer — and even residents in neighboring states — are benefiting from the ample power generated from clean burning natural gas.
Here’s how that works: Ohio is part of a 13-state “PJM Interconnection” competitive free market system. This free market includes Delaware, Illinois, Indiana, Kentucky, Maryland, Michigan, New Jersey, North Carolina, Ohio, Pennsylvania, Tennessee, Virginia, West Virginia and the District of Columbia. So quite literally, gas produced using fracking in Ohio will not only take care of all in-state power needs, it will also support low-cost electricity for all of the states that participate in this 13-state free market system which services 61 million consumers.
Private investment in Ohio natural gas-fired power plant construction projects is happening at such a rapid rate that the U.S. Energy Information Administration (EIA) can’t even keep pace. A case in point: the following map from an EIA forecast released eight months ago under the headline “Many natural gas-fired power plants under construction are near major shale plays” doesn’t even include several of the new Ohio projects in the works.

If what’s happening in Ohio is any indication of where things may lead in other shale plays, it’s fair to say that the United States could see a tremendous uptick in private investment in natural gas-fired power.
Other areas of major downstream investment include an estimated investment from PTT Global Chemical.  To date, there’s already been a surge in downstream investment from smaller petrochemical plants across the state, as well as combined heat and power plants and natural gas refueling stations. Investment already accounted for and future estimates from downstream activities is currently estimated at $15.3 billion with 11 new natural gas power plants adding at least $9 million per year to Ohio school districts.
With so much in the works, it is no surprise people in Ohio are calling all of this incredible news “a dream come true.” And as last week’s tour showed, it’s not only one segment of the industry having such a profound impact on Ohio’s economy, but the entire natural gas lifecycle.