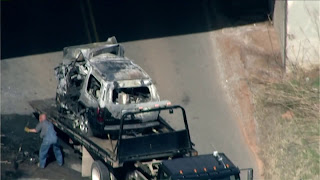 
Aubrey McClendon, a founder and former chief executive of Chesapeake Energy, died in a car crash Wednesday at age 56, a day after he was charged with conspiring to rig bids for oil and natural gas leases.

McClendon crashed into an embankment while traveling at a "high rate of speed" in Oklahoma City on Wednesday morning, said Capt. Paco Balderrama of the Oklahoma City Police Department. McClendon's vehicle was engulfed in flame, he said.

"He pretty much drove straight into the wall," Balderrama said.


Balderrama says McClendon died instantly from the crash. After that, the 2013 Chevy Tahoe caught fire.

“He pretty much drove straight into the wall,” Balderrama said. “The information out there at the scene is that he went left of center, went through a grassy area right before colliding into the embankment. There was plenty of opportunity for him to correct and get back on the roadway and that didn’t occur.”

Our thoughts and condolences go out to McClendon's family.

Chesapeake Energy has released a statement.