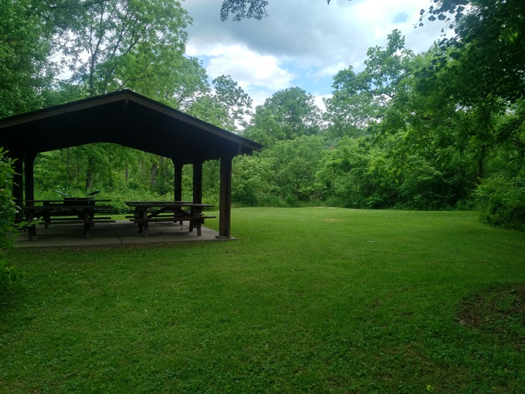 This example proves beyond a shadow of a doubt that the recent public relations stunt was in fact hosted, organized and attended by people who do not actually live and work in the area. It also shows the entire fiasco was concocted for the sole purpose of generating misleading headlines to promote a movement that has no real local following.
Out of Town And Out of TouchLast month, EID took a look at the various #NoDAPL-style pipeline protest camps cropping up throughout the country. At the time, no such camps had been set up in Ohio. But just one month later, this latest craze of the “Keep It in the Ground” (KIITG) movement made its way to the Buckeye State.
A so-called #NoDAPL copycat “action camp” aimed at stopping fracking and proposed pipeline routes was set up in the Wayne National Forest. And it was organized by none other than Myron Dewey, an independent filmmaker and one of the more prominent online voices of the Dakota Access Pipeline (DAPL) protests, along with Athens-based Appalachia Resist!, Ohio’s most fringe environmental activist groups.
As described by a local Monroe County resident in the Times-Leader, the campers were anything but a local contingent,

“The folks came in for a weekend of camping from all over. There were people from Vermont, Michigan, Carolina, and all across Ohio. The police were very vigilant and I appreciated their presence.” (Emphasis added)

That police presence was warranted, considering the violence earlier this year at the Dakota Access Pipeline camp and the fact that convicted criminal Peter Gibbons-Ballew was in attendance at the Ohio copycat camp. EID recently revealed that Gibbon-Ballew — who is currently serving an 18-month probation sentence  — is using the alias “Cusi Ballew” in local media reports. The Appalachian Resist! leader even admitted he is an outsider in a recent interview with the Times Leader,

“People say I’m an outsider when I’m from Athens County, but I will have to fight fracking when it comes to Athens County.  I would rather fight it here so it won’t even come there.” (Emphasis added)

Here’s a snapshot of Peter, aka “Cusi,” Gibbons-Ballew being arrested just months ago: 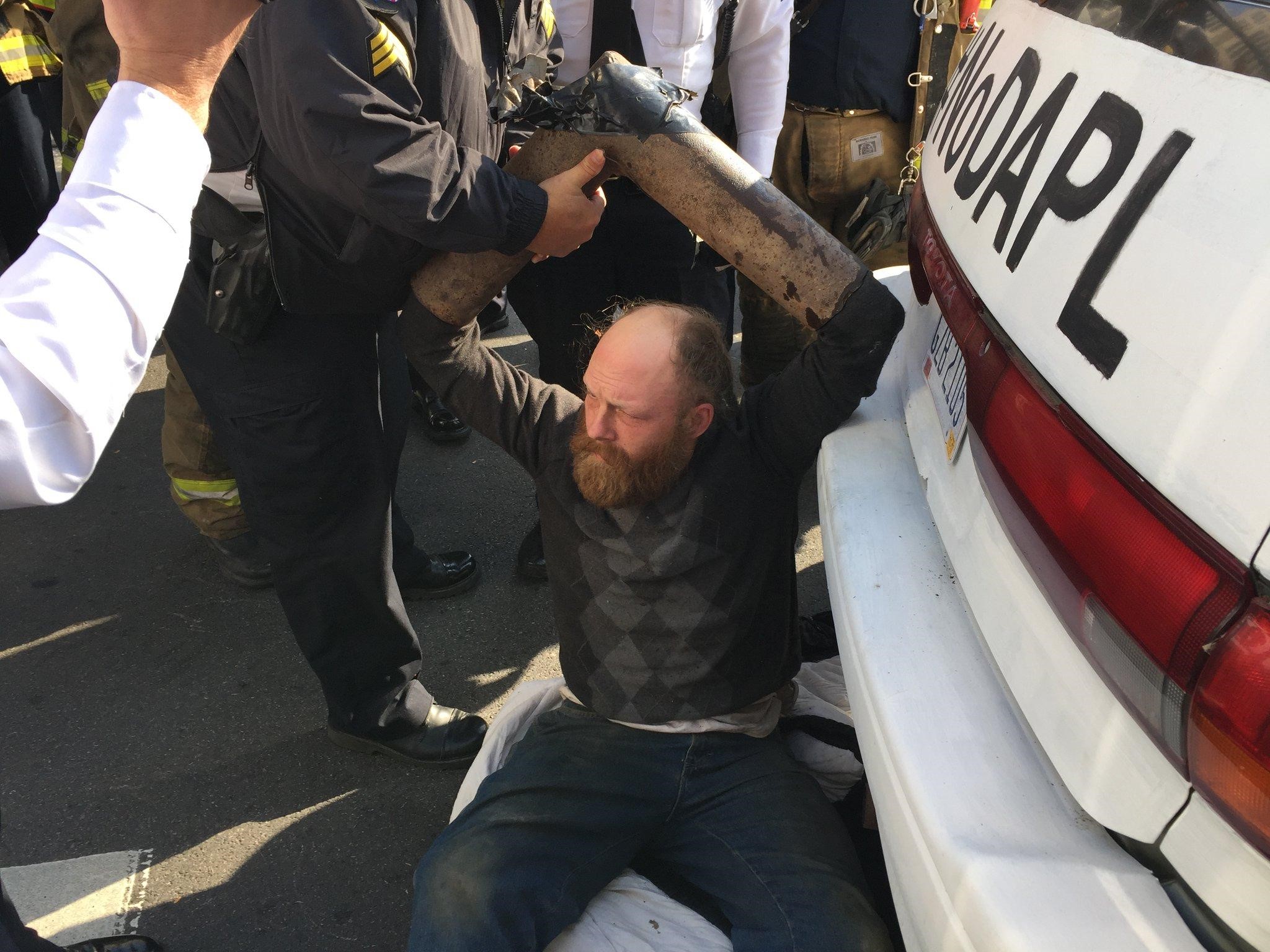 “Long Term” Resistance Camp an Epic Fail
While out-of-town weekend copycat campers like to talk a big game regarding their “long-term resistance” plans in Ohio, the reality is anything but.
In a recent press release, activists announced “long term resistance camp launched,” followed by a May 31 Facebook post calling on campers to come join their so-called resistance camp at Lamping Homestead Campground in the Wayne National Forest. 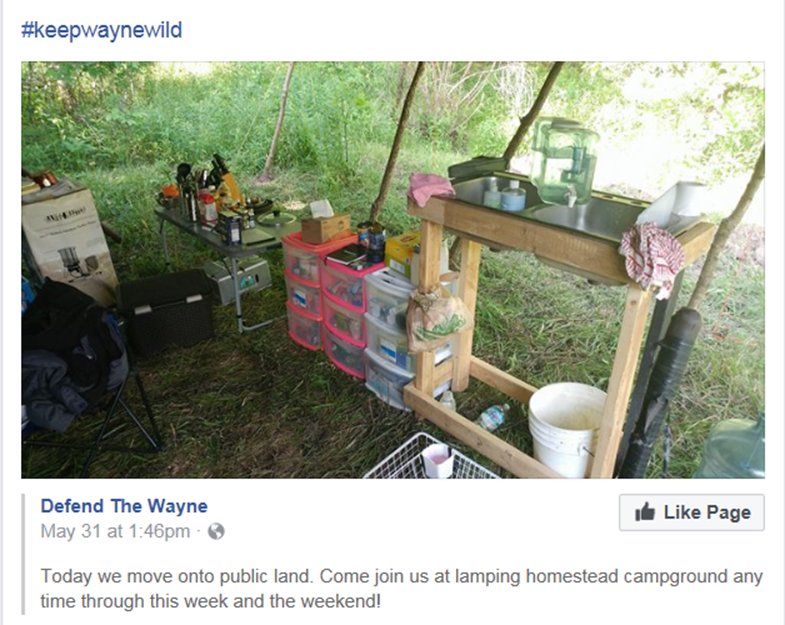 Anti-Fracking Copycat Campers
According to the Facebook page of Keep Wayne Wild, an Appalachia Resist! front group, they planned to be out at the campground all week.  Well, it appears the above picture of their campsite kitchen may very well have been taken in someone’s backyard, as recent photos from the very same copycat campsite they claim is home to this so-called “long-term resistance” prove that there is no sign of any campers, nor any recent activity. 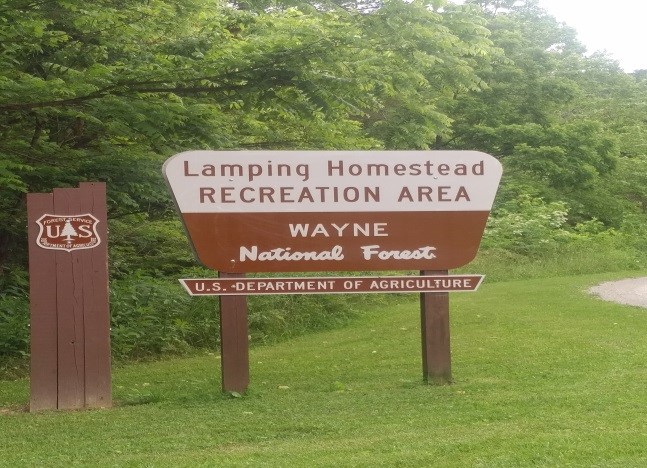 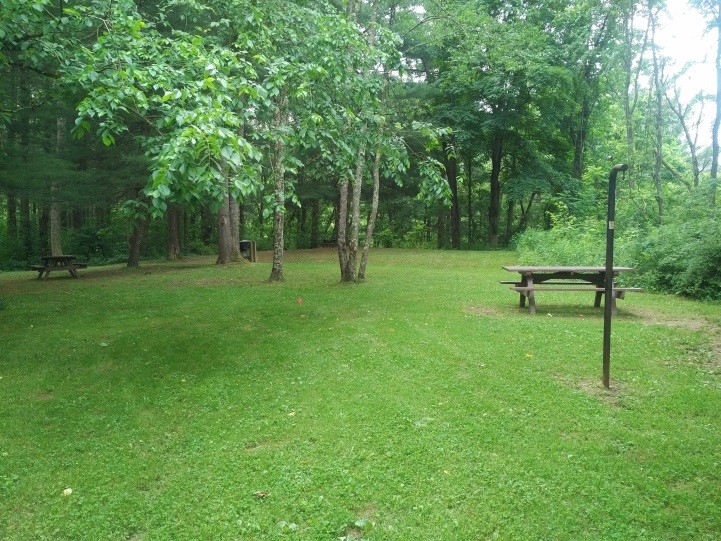 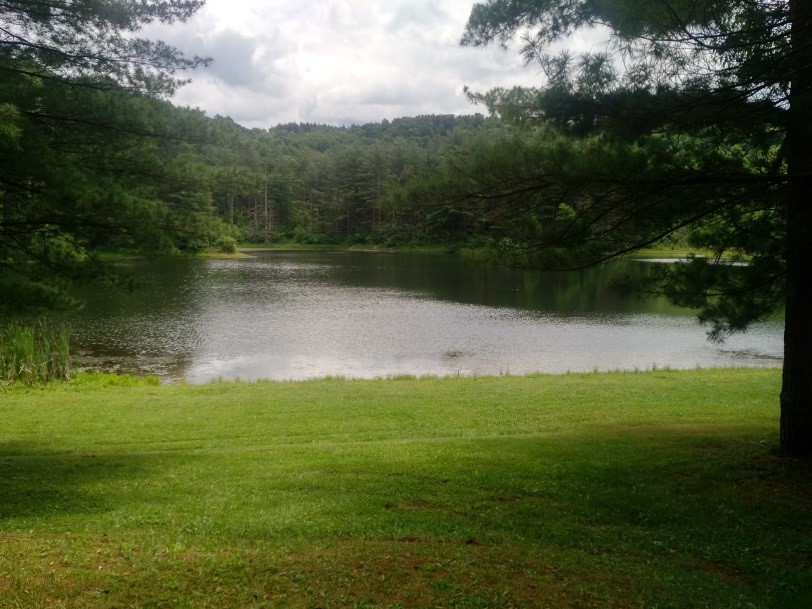 June 7, 2017, Lamping Homestead Recreation Area Campsite: no sign of anti-fracking campers or protestors.
It’s abundantly clear that when it comes to one of Ohio’s most prolific areas of natural gas development, the people who actually live and work in the area are supportive of the development taking place. That’s why all of the Monroe County Commissioners, townships trustees, landowners, concerned citizens, and the leadership of the Switzerland Local Schools have been vocal supporters of fracking and leasing of minerals in the Wayne National Forest.
Had these out-of-towners come to Monroe County just a few years ago, they would have witnessed firsthand the closure of the county’s largest employer, Ormet, an independent U.S. producer of aluminum, which resulted in 1,000 jobs moving to China. Monroe County was a poster child of shipping jobs overseas. In fact, unless you live and work in Ohio, it’s hard to imagine the positive transformational change that has occurred in many of the state’s poorest counties due to shale development.
Heart-wrenching stories have emerged, like Brian Howell, a 27-year old father of toddlers who recounted the pain he felt when forced to explain to his young daughter that he was unable to purchase her a toy, due to his recent layoff from the plant. As Howell told reporters in 2013, “that crushed me.”  Other local displaced workers reported how they were “devastated” and concerned that the county would be left in peril. Local resident Ronald Jackson told reporters,

“This is devastating. This county will be become a welfare county.”

Mr. Jackson may have been correct back in 2013, but the county did not realize this dire prediction — thanks to shale development.
In stark contrast, today, the industrial park just a few miles from the closed Ormet plant shows signs of life, with new business and corporate offices. The industrial park was even renamed “Monroe County’s Energy Campus” and has received high honors from the Eastern Ohio Development Alliance (EODA) as the emerging area to conduct business in the region. With a flurry of new pipelines, staggering production of natural gas, and access to road, rail, and barge, Clarington, Ohio (located in the Monroe County) is on pace to set the standard for natural gas prices.  To truly highlight how incredible this turnaround has been, the very site where just three years ago the largest employer left town is today under development for a $500 million new natural gas-fueled power plant, which will bring millions in tax revenues and hundreds of jobs.
But these out-of-towners and out-of-touch weekend copycat campers refuse to acknowledge any of these facts. Just this week, we learned that fringe environmental activists are showing their true colors in Youngstown by pushing petitions to not only end all oil and gas development— but all economic development, period. That’s the real goal of groups like Appalachia Resist!, Earth First!, Community Environmental Legal Defense Fund (CELDF) and others.
Organizations such as these see economic growth as evil — from your local car dealership to essentially any construction project or for any economic development purpose. Their goal is far more reaching than to simply ban fracking or pipelines — they actually want to cease all efforts to bring economic prosperity to Ohio and the Appalachian Region. So it’s a good thing that the people who do live and work in the state reject their ideologies, and that rejection is clearly evident by this most recent epic failure of this not-so actionable “long term resistance camp.”