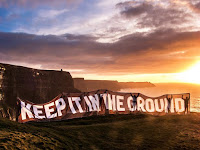 From the Washington Examiner:


The Chamber of Commerce and trade unions took aim at anti-fossil fuel activists in releasing a scathing report on Tuesday that concluded that their form of environmentalism slowed economic activity by over $91 billion in the U.S. in 2018.

“Taken together, anti-energy activism has helped prevent at least $91.9 billion of economic activity in the United States, which is larger than the entire economies of 12 states,” according to the report, “Infrastructure Lost: Why America Cannot Afford To ‘Keep It In the Ground.’”

The report was issued by the Chamber’s Global Energy Institute and the Laborers’ International Union of North America.

The Keep It In the Ground movement began in the latter years of the Obama administration, with the aim of ending all fossil fuel production by blocking pipelines, coal export terminals, and similar projects.

You can read the rest of this article by clicking here.
Fracking 2019