By Rob Magee - March 10, 2018
The Ohio Department of Natural Resources has now released the production data from the Utica shale for the fourth quarter of 2017. As always, we are going to give you a look at how the numbers compare to past quarters, past years, and how they break down among the various drillers who are active in Ohio and the counties where they are drilling. Of course, we can now see how the entire year's production from 2017 stacks up to previous years.  We also have the top 10 oil and gas wells detailed below.PRODUCTION RATE COMPARISONS
First up, let's take a look at how the quarterly data compares from the 1st quarter of 2014 through the fourth quarter of 2017. As a reminder, all oil figures are 42-gallon barrels, and all gas production is measured in MCF:

So, total oil production has now risen in four straight quarters after declining during every quarter of 2016.  Oil production rates, though, dropped off to the lowest levels we've seen in the last four years during the final quarter of 2017. 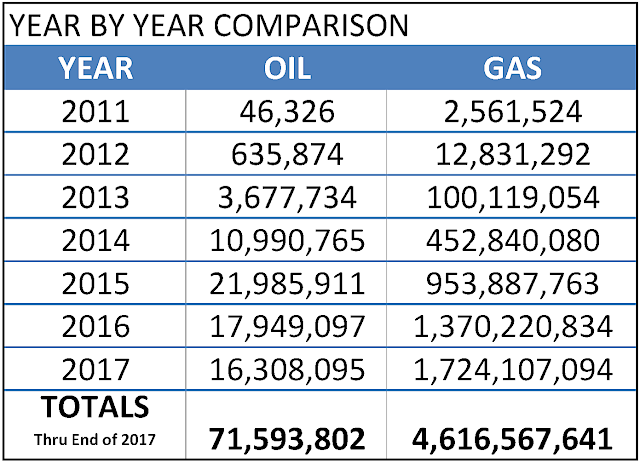 The numbers show that the decline in oil production during 2016 was more rapid than the recovery in production in 2017 (as the rates shown above in the quarterly comparison also indicate). Despite having over 300 more producing wells during the fourth quarter of 2017 than during the fourth quarter of 2016, there were over 1,600,000 more barrels of oil produced in 2016 - a 9 percent decline.  Oil production is down over 5,600,000 barrels from the high point reached in 2015, a decline over 25 percent.

In contrast, natural gas production hit a new high in 2017.   The rate of increase has slowed, though.  After a 43.6 percent increase from 2015 to 2016, there was a 25.8 percent increase in gas production from 2016 to 2017.  Still, the natural gas produced from the Utica shale in 2017 represent over 37 percent of the total amount produced over the past 7 years.  It will be interesting to see what kind of effect completion of the Rover pipeline will have on these figures in 2018.

Here are the top 10 oil-producing wells in quarter four of 2017:

Here are the top 10 gas-producing wells from the quarter:

Ascent Resources crowds everyone else out of the top 10 during this quarter.  Both total production and production rates from these wells stayed very close to the numbers posted during the third quarter of 2017.

COUNTY-BY-COUNTYHere is the production data broken down by county:

Guernsey County lagged behind Harrison County in total oil production in the third quarter of 2017 despite having higher production rates.  In the fourth quarter, though, Guernsey outpaced Harrison in all areas as far as oil production is concerned.

As for gas production, Belmont County continues to rule the roost, leaving little reason to wonder why it has moved past Carroll County to have the most Utica shale permits issued and continues to narrow the gap in total number of wells producing.

OPERATOR-BY-OPERATORAnd here are the results broken down by operator:

A couple of new names appear on the list that weren't there in the third quarter, including Chevron Appalachia LLC, Geopetro LLC, and Northwood Energy Corp.  Gulfport Appalachia posted strong gas production rates from its small number of wells for the second straight quarter.  Rice Drilling also continues to report high gas production rates.  Not surprisingly, considering that all of the top 10 gas wells were operated by them, Ascent Resources produced more total natural gas than anyone else.

We hope you enjoyed this breakdown of the data.  You can view the spreadsheet from the ODNR containing all of the production data by clicking here.