The Ohio Environmental Protection Agency (OEPA) hosted a first-of-its-kind oil and gas open house on Tuesday to discuss the importance of communication between regulators and industry, and provide an update on regulatory requirements and legislative changes for horizontal shale well drilling. The Ohio Department of Natural Resources (ODNR) also participated in the open house, as well as the Ohio Oil and Gas Association (OOGA), Ohio Oil and Gas Energy Education Program (OOGEEP) and Energy in Depth (EID). Ohio EPA Director Craig Butler began the open house by stating:

“We knew horizontal drilling was likely to be game changer for Ohio. Ohio EPA, ODNR, and ODH were given a directive to keep the public trust and communicate with the industry and we feel we have developed one of the best programs in the country.” 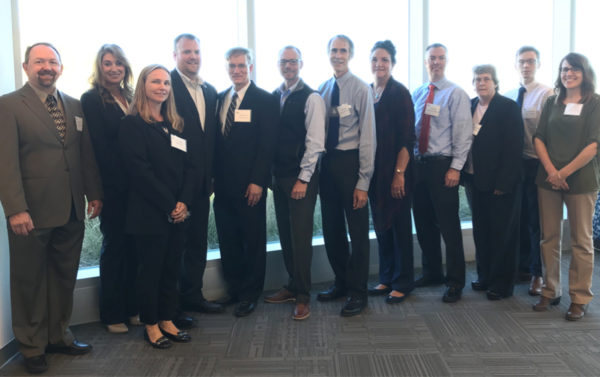 Caption: Ohio EPA Director Craig Butler and staff, Ohio Department of Natural Resources staff, Ohio Oil and Gas Energy Education Program, and EID.
Ohio Still Looks to ‘Do It Right’
In 2012, headlines rang out that “Ohio Looks to ‘Do It Right’ as Shale Boom Revives Steel.” As Director Butler and his team at the OEPA echoed during the open house, Ohio regulators have been on a mission since 2010 to develop Ohio’s shale resources while protecting the health and safety of its residents and the environment.
The OEPA’s record speaks for itself and the agency is continuously looking at new rules and regulations to safeguard Ohio’s environment. In a very short period of time, Ohio has completely overhauled its oil and gas laws to specifically address horizontal drilling and hydraulic fracturing, with SB 165, SB 315 and HB 59 being specific examples of how Ohio is taking a proactive approach to shale development. From 2013 to today, these state laws and interagency actions continue to address new rules and regulations to address modern shale development. Director Butler reinforced this, stating:

“The oil and gas is a significant industry for the state of Ohio and it’s our job to protect public health and the environment. We’ve gotta have regulatory programs and strong technical assistance programs. We need to protect our natural resources and our public health.”

The proactive approach to shale development was a key component of the open house, as the primary purpose was to address horizontal well regulations and best practices for acquisitions of producing wells. The OEPA encouraged operators to notify the agency within 30 days after a well is purchased. Operators who purchase a well and the permit are then responsible to comply with the provisions outlined in the permit. The agency recommended that operators communicate “early and often” during any acquisitions of wells, stating, “Meet with us. Read your permit when you get it, as you are going through the process ask the questions. Communicate up front.”
When asked if the oil and gas industry has done a good job of communicating with the OEPA and ODNR so far, the collective response from the agencies was “yes.” But the agencies’ representatives were quick to encourage more communication with their offices.
During the meeting, OEPA officials went through the considerable number of major federal and state air rules that the oil and gas industry must comply with. While misinformation campaigns would have the public believe otherwise, the oil and natural gas industry is subject to a litany of federal and state air emission regulations.
The result of Ohio’s proactive regulatory approach to shale development? One day after the Ohio EPA hosted oil and gas open house, Ohio University held a Shale Innovation Project webinar entitled, “Methane Regulations: Federal, State, and Local Trends” which included OPEA Division of Air Pollution Control Chief Robert F. Hodanbosi. According to Hodanbosi, when his inspectors have gone out to investigate complaints, the Ohio EPA “haven’t found the issues described by the residents.”
In other words, while some groups may still be out there fearmongering, the OEPA’s regulations are proving effective, and investigations conducted by the Ohio EPA have concluded reported concerns are not a risk to human health. Multiple academic studies conducted in Ohio have confirmed that as well.
As a reminder, for its latest study, the University of Cincinnati (UC) gathered air samples near production sites in three of the top producing oil and natural gas counties in Ohio — Guernsey, Noble and Belmont — to examine air quality near natural gas extraction. And according to a media report, lead researcher Dr. Erin Hayes told local elected officials during a recent presentation on the study that “none of the air sample averages exceeded EPA levels of health concern” after being evaluated for 63 volatile organic compounds (VOCs) and formaldehyde.
In addressing another area where activists continue to miss the mark, the OPEA also reminded open house attendees how the various agencies coordinate if an incident occurs. Executive Order 2016-04K went into practice last year, mandating the OEPA, ODNR, Ohio State Fire Marshalls, and the Public Utilities Commission of Ohio join forces to create a one-call emergency notification system for oil and natural gas emergencies so that these agencies work side-by-side and in tandem with each other and have someone on call 24-7. The regulators also have a new FLIR infrared camera on hand to assist them with methane leak detection, which can trace gases to their root source. In other words, the Ohio EPA takes fugitive methane emissions very seriously.
Ohio is a great example of how methane emissions from oil and natural gas systems have been reduced in the U.S. Case in point: the Appalachian Basin, which includes the Marcellus and Utica shales, saw methane emissions fall 3.5 percent in 2016, according to the latest U.S. EPA Greenhouse Gas Reporting Program (GHGRP) data on large oil and gas facilities. From 2011 to 2016, the Appalachian Basin has reduced methane emissions by a whopping 63 percent, while at the same time being the “main driver of growth in total U.S. shale gas production and the main source of total U.S. dry natural gas production,” according to U.S. Energy Information Administration.
The latest U.S. EPA Greenhouse Gas Inventory shows overall methane emissions from oil and natural gas systems have decreased 19 percent since 1990 (249 million metric tons to 202 mmt) at the same time natural gas production has increased 52 percent and oil production has increased 28 percent. 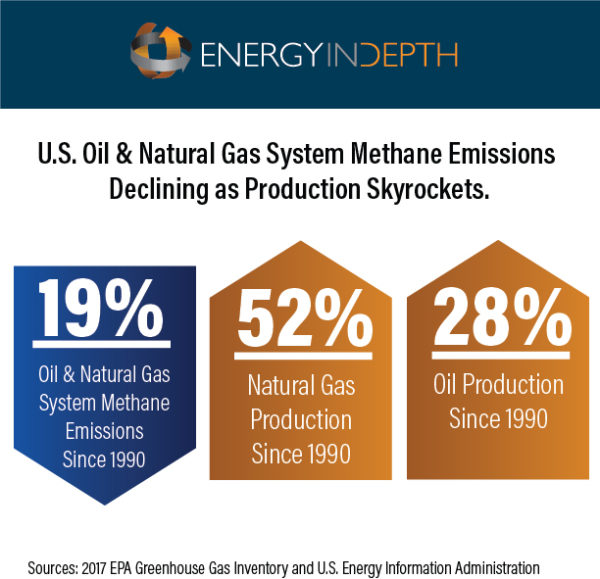 So what have we learned from this Ohio EPA Oil and Gas Open House? We learned that communication is key and that shale can in fact be developed while protecting the environment. And we certainly appreciate the opportunity to have been included in the event.