The World Bank released its October 2017 Commodity Markets Outlook last week, finding the average U.S. shale breakeven oil price has dropped more than 42 percent since the beginning of 2013, thanks to technological improvements. Advances in technology and drilling techniques such as hydraulic fracturing, coupled with resource rich domestic shale plays, means American producers are continuing to thrive despite lower commodity prices.

Of course, technologies such as horizontal drilling and fracking have opened a wealth of oil resources that were previously unreachable just over a decade ago. In the latest data from the U.S. Energy Information Administration (EIA), shale production accounted for over six million barrels per day (b/d) in October of this year, up from about 1.5 million b/d at the start of 2010 – a 400 percent increase. In fact, EIA estimates producers will best the previous total U.S. crude production record set in 1970 next year, thanks in large part to shale development. As EIA states:

“EIA forecasts that most of the growth in U.S. crude oil production through the end of 2018 will come from tight rock formations within the Permian region in Texas and from the Federal Gulf of Mexico.” 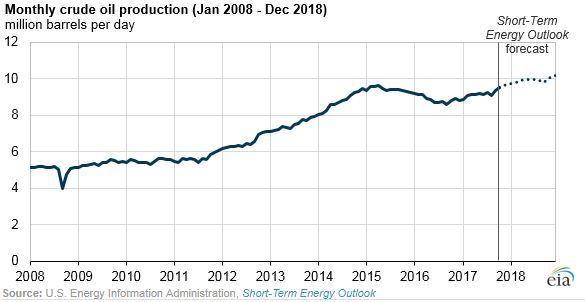 While a combination of factors helped shale oil production skyrocket over the past several years, innovation in development has had the largest impact on overall efficiency, the World Bank Outlook states:

“Despite lower oil prices, shale producers have been able to raise production through cost reductions (mainly for services, equipment, and labor), technological improvements, and better planning decisions as knowledge expands in a relatively young sector.”

This continued increase in production efficiency in the face of low oil prices has allowed the United States to become an increasingly important player in the global oil market. Now the largest oil and natural gas producer in the world, topping OPEC countries such as Saudi Arabia, America is not only competitive thanks to advances in shale development, it’s dominating.