The stack of defeats for anti-fracking activists and the Community Environmental Legal Defense Fund (CELDF) in Ohio continue to pile up. For the third year in a row, fringe environmental activists attempted a ballot measure to advance a so-called “bill of rights” charter amendment in Athens, Ohio. Today, and similar to the past two years, the Athens County Board of Elections again voted unanimously to reject a “bill of rights” ballot initiative, ruling the measure as “invalid.”
It truly is Groundhog Day in Athens, as anti-fracking activists are recycling the same talking points as last year in the wake of the vote. Activist Dick McGinn again called the Board of Election’s decision a “travesty” and vowed to file a protest. McGinn was clearly one of the whopping three people who attended the anti-fracking event at the Athens County Board of Elections today, showing again how incredibly marginalized opposition to oil and gas development really is in Ohio, a fact EID has highlighted before, and will continue to highlight. 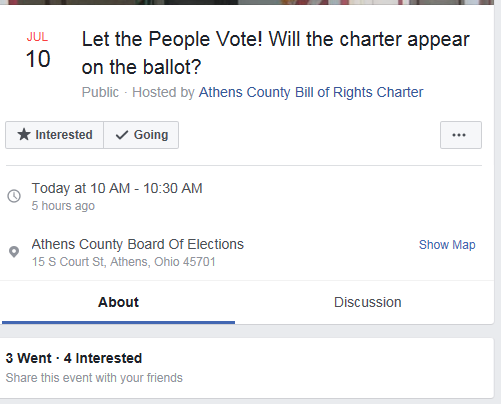 As a reminder, local controls have repeatedly been rejected in Ohio, as the Ohio Department of Natural Resources has been given sole regulatory authority over the oil and gas industry, per the Ohio Revised Code. The most recent failed ballot measure comes after the Ohio Supreme Court ruled twice that the so-called “bill of rights” would not be permitted on the general election ballot.
While there is no shale development going on in Athens, all of the county residents are still reaping the benefits of shale development. EID recently highlighted that Athens County received $31,599 from the sale of minerals in Ohio’s Wayne National Forest, with another $100,000 yet to come, despite the fact that there was no mineral lease sale in Athens County. The reason that the anti-fracking “movement” does not exist in Ohio is because fracking is putting people back to work in Appalachia, as evidenced by the four million in work hours logged by Ohio Laborers union members.