This week, Thailand-based firm PTT Global Chemical (PTTGC) America announced it would purchase land along the Ohio River in Belmont County for $13.8 million to build a proposed $6 billion ethane cracker plant. The processing plant will support the record-breaking natural gas production coming out of Ohio by allowing a valuable component of the natural gas, ethane, to be “cracked” locally into ethylene, a feedstock source for the petrochemical industry. To date, a total investment made by possible from revenue generated by Ohio liquor sales and private investment by this company totals approximately $130 million invested over the past 28 months to bring a multi-billion ethane cracker to the Ohio. Although a final decision to build the plant has not been announced, it’s safe to say that Ohio is “all-in” to support the project and the game-changer that will come as a result from the manufacturing of petrochemical products along the Ohio River. If a look at the development of the Monaca, Pennsylvania Shell ethane cracker is any indicator of things to come in Ohio, one certainly has to be optimistic that PTTGC is well on its way to moving the project forward.
According to the Pittsburgh Post-Gazette, Royal Dutch Shell announced it would consider building an ethane cracker in 2011, and five years later the company announced a final decision had been made. Looking at Shell’s timeline, it’s clear that the path PTTGC timeline is strikingly similar and if history repeats itself, the timeline suggests Ohio will receive good news later this year. If announced as planned, the decision would come a year sooner than then Shell project.
Shell Chemical Appalachia Ethane Cracker Timeline 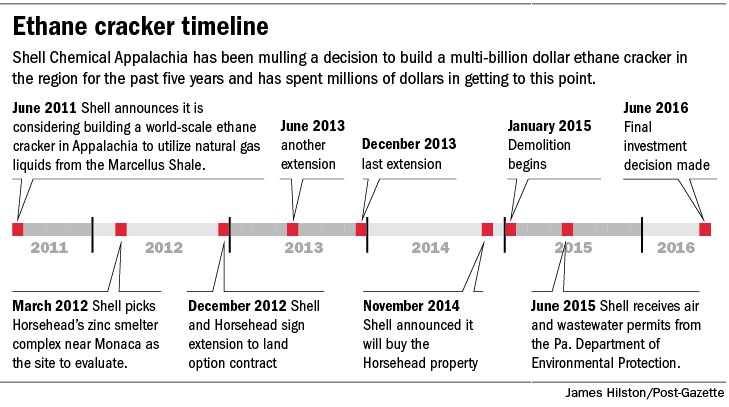 To view a PDF of the PTT Global Ethane Cracker Timeline, click here.
Raise a glass and build an ethane cracker
To date, Ohio’s more than $1 billion in annual liquor sales have poured $17 million into securing PTTGC’s final investment decision.  Here’s how that works: In 2013 Ohio created a private nonprofit, JobsOhio, to entice business development and provide incentive packages for companies like PTTGC to come to the state. JobsOhio acquired Ohio’s liquor sales business to gain a revenue stream and fund these efforts. Operating income from liquor sales made it possible for the state to provide an “aggressive incentive package.” Therefore every mixed drink or shot that’s taken in bars across the Buckeye State have quite literally supported the advancement of this project.
The Buckeye State is cheering on this multi-billion dollar project and the thousands of jobs that will come right along with it and is hopeful for a final investment decision to secure this ethane cracker later this year.