By Rob Magee - March 22, 2017
The Ohio Department of Natural Resources has now released the production data from the Utica shale for the fourth quarter of 2016. As always, we are going to give you a look at how the numbers compare to past quarters, past years, and how they break down among the various drillers who are active in Ohio and the counties where they are drilling. We also have the top 10 oil and gas wells detailed below.

First up, let's take a look at how the quarterly data compares from the 1st quarter of 2014 through the fourth quarter of 2016. As a reminder, all oil figures are 42-gallon barrels, and all gas production is measured in MCF:

While the gas production rates have been up and down since 2014, this is the first time since the Utica shale data began to be tracked that the total gas production in a quarter has declined from the quarter before.

Oil production rates continued their fall in the 4th quarter of 2016 as well. The significant decline in 2016 can be seen clearly in this graph: 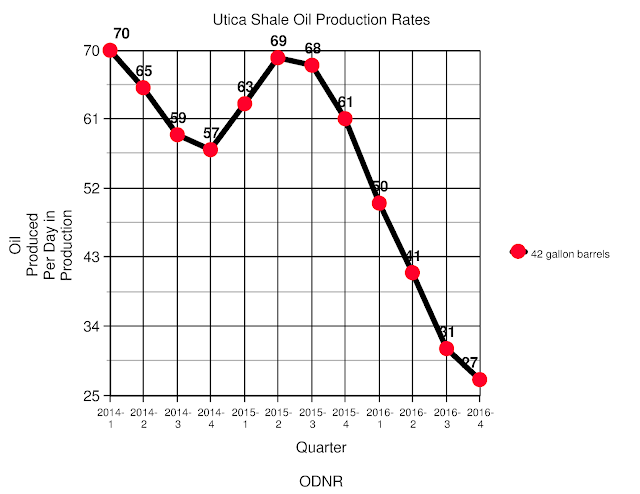 As expected, oil production saw a large decrease from 2015. The slowdown in gas production during the 4th quarter means that the total for 2016 falls a little short of eclipsing the total gas production of 2014 and 2015 combined. Over 47% of the total Utica shale production from the last 6 years came during 2016.

These were the top 10 oil producing wells during quarter 4:

And the top 10 gas producing wells: