By Rob Magee - September 05, 2018
The Ohio Department of Natural Resources has now released the production data from the Utica shale for the second quarter of 2018. As always, we are going to give you a look at how the numbers compare to past quarters, past years, and how they break down among the various drillers who are active in Ohio and the counties where they are drilling. We'll look at where the production numbers would end up for 2018 if they continue at the same pace as they have had through the first two quarters. We also have the top 10 oil and gas wells detailed below.
PRODUCTION RATE COMPARISONS

First up, let's take a look at how the quarterly data compares from the first quarter of 2014 (which is when the ODNR began reporting quarterly data rather than one yearly report) through the second quarter of 2018. As a reminder, all oil figures are 42-gallon barrels, and all gas production is measured in MCF: Gas production, which has consistently been hitting new highs in terms of production rates, actually saw a slight rate decline in Q2 of 2018.  The total amount of gas produced did set another quarterly record, though.  The following graph gives a look at gas production rates quarter by quarter, showing how much steadier these rates have been in comparison to oil production. 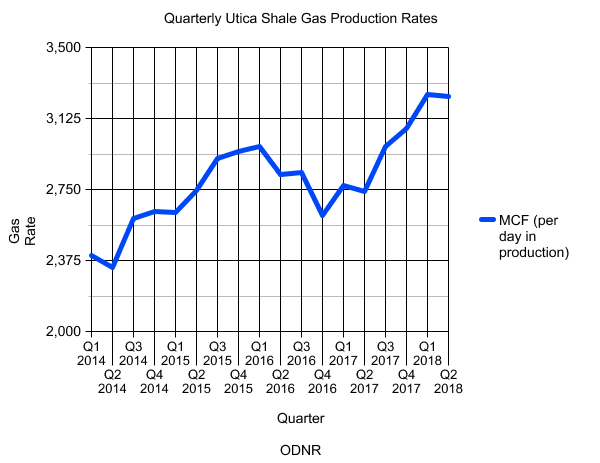 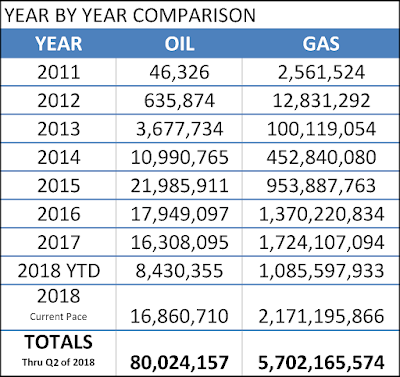 With stronger numbers in the second quarter, the Utica is now on pace to avoid a third straight year of declining overall oil production.  Gas production remains on pace to surpass 2,000,000,000 MCF for the year for the first time.  More gas has already been produced in the first two quarters of 2018 than in all of 2015.

Eclipse Resources remains the Utica leader as far as oil production goes, with 6 of the top 10 wells.  Chesapeake Energy, which will soon no longer be appearing on these reports, gets two Harrison County wells into the top 10 oil producers for the second consecutive quarter (although these are different wells than in quarter one).
Here are the top 10 gas-producing wells from the quarter:

Ascent Resources continues to dominate this list, although not quite to the same extent as in the past couple of quarters.  In the fourth quarter of 2017, Ascent had all of the top 10 gas-producing wells in the play.  Last quarter Eclipse took the top spot with the same Herrick East 11H well that appears in the top 10 this quarter, while Ascent had all of the other nine.  Now Chesapeake pops up with the fifth-best gas well in Q2.

When it comes to oil production, as the top 10 wells above would already suggest, Guernsey County is far and away the top spot in Ohio. Even though there are less producing wells in Guernsey than in four other counties, it easily saw the most overall oil production and had by far the best production rates.

Belmont and Jefferson continue to be the top counties when it comes to gas production rates, far outpacing all others.  Belmont also produced over 100,000,000 more MCF of gas than any other county in the state during Q2 of 2018.

Gulfport Appalachia continues to see huge gas production rates from its six wells.  Statoil and Rice Energy take second and third in that category, respectively, while Ascent Resources produced the most gas overall.
While Eclipse Resources would be expected to show well in oil production after having six of the top ten oil producing wells of the quarter, it's Rex Energy that slips into the top spot as far as daily rate, with 124 barrels produced per day in production.
We hope you enjoyed this breakdown of the data.  You can view the spreadsheet from the ODNR containing all of the production data by clicking here.