The Wall Street Journal published an infographic this week based on new Moody’s Investors Service data  that further debunks the oft-repeated “Keep It In the Ground” movement claim that fracking drives down property values.
The WSJ graphic shows state-by-state property value trends since 2007, which happens to be about the time the U.S. shale revolution took off. 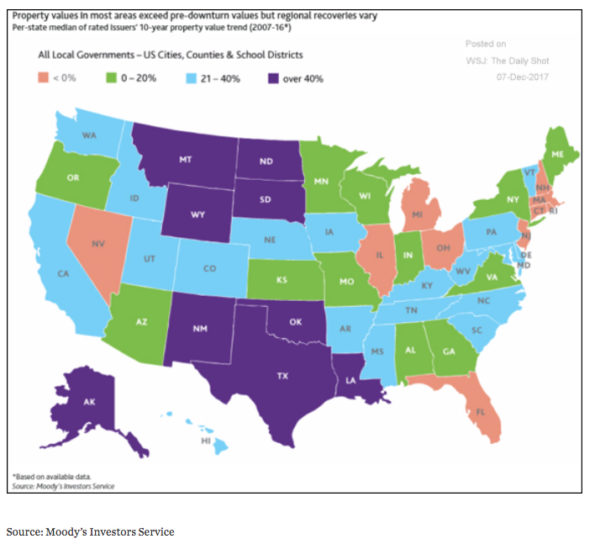 Notably, eight of the nine states that have experienced the most robust property value growth over the past decade— an increase of 40 percent or more since 2007, according to the graphic — are major oil and natural gas producing states.
Seven of those states — Texas, North Dakota, New Mexico, Louisiana, Oklahoma, Wyoming and Montana — have had significant shale development since 2007 (fracking has been conducted in Alaska as well, though not on a major scale).
Also of note is the fact that Pennsylvania, which has emerged as the second most prolific natural gas producer in the U.S. thanks to fracking, has seen more significant property value growth since 2007 (21-40 percent) than neighboring New York (0-20 percent), which has banned fracking.
All told, a vast majority of major U.S. shale states have seen their property values surge — the complete opposite of what fracking opponents have repeatedly claimed.
And this is just the latest real world data debunking these unfounded claims.
For instance, in Tarrant County, Texas — which is the top natural gas producing county in what is by far the most prolific oil and natural gas producing state in the U.S. — the overall market value of property jumped 10.6 percent this year to $219.4 billion from $198.3 billion. This follows a 14 percent jump in 2016. The rest of the Lone Star State isn’t far behind, as home values have gone up 7.1 percent over last year.
In Colorado, which is a top-10 oil and gas producing state, property values have increased 21-40 percent since 2007, according to the WSJ graphic. This data is in line with a 2016 Ballotpedia study that found “no definitive evidence” that oil and gas development is negatively impacting Colorado property values. The study also noted that “homes near oil and gas development in some cases have higher sales prices and values than homes without.”
In Weld County, Colorado’s top oil producing county, a 2015 EID investigation found the median home value rose 15.3 percent in 2014. Weld County Assessor Chris Woodruff told EID that:

“We haven’t seen that proximity to oil and gas operations has caused a loss in value. We’re not seeing that.”

EID has also previously noted that two of Pennsylvania’s most heavily drilled counties, Bradford and Washington, saw median house values increase 61.5 percent and 70 percent, respectively, from 2000 to 2013. These increases came at the same time the combined shale well counts in those counties went from zero to 2,800.
Similarly, home values have gone up 6 percent in Montana, 4 percent in New Mexico, 3.2 percentin Oklahoma and 2.6 percent in Wyoming over the past year at the same time drilling has increased significantly in each of those states.
Clearly, if anti-fracking activists’ claims that fracking drives down property values were true, this data would be trending in the opposite direction. But this WSJ graphic plainly illustrates the fact that property values are actually increasing in areas with significant shale development, busting another tired “Keep It In The Ground” myth.