With 83 percent of anti-fracking ballot measures in Ohio having failed or been ruled invalid by various courts, it’s certainly fair to say that the Community Environmental Legal Defense Fund (CELDF) has been marginalized.
However, despite the onslaught of defeats, CELDF continues to abuse Ohio cities by pushing anti-fracking ballot measures on them. On Election Day two cities, Youngstown and Waterville, will vote on the so-called Community Bill of Rights.  In response, coalition groups comprised of business leaders, elected officials, and unions are organizing to defeat the measures. In other words, CELDF will once again face strong opposition.
Here’s what you need to know about both ballot measures:
City of Youngstown Issue 4: Community Bill of Rights
Five Times Failed, CELDF Abuses Voters for Sixth Time
If at first you don’t succeed, try six times? That’s the story in Youngstown, where voters will go to the ballot for the sixth consecutive time on “Issue 4” to vote on the Community Bill of Rights – and taxpayers will be footing the bill.
Taxpayers Have Already Spent Tens of Thousands
So far, the measure has cost taxpayers over $80,000 just to go on the ballot for the first five defeats. With this upcoming “Issue 4” on the ballot, it’s guaranteed to cost several thousand more.
Campaign Using Children (Again) To Advance Agenda
The Youngstown Community Bill of Rights is, of course, the brain child of CELDF, but it is also being pushed by Frack Free Mahoning Valley, led by Dr. Ray and Susie Biersdorfer. The Biersdorfers were recently at the center of an opinion editorial from the Youngstown Vindicatorentitled “Frick and Frack are Back,” recalling that just a few months ago Susie Biersdorfer was caught attacking me personally, while I was nine months pregnant. In short, to say these activists are fringe environmental extremists or outliers is an understatement.  But as this below flyer shows, they’re at it again, using pregnant women and children as pons in their deceptive campaign: 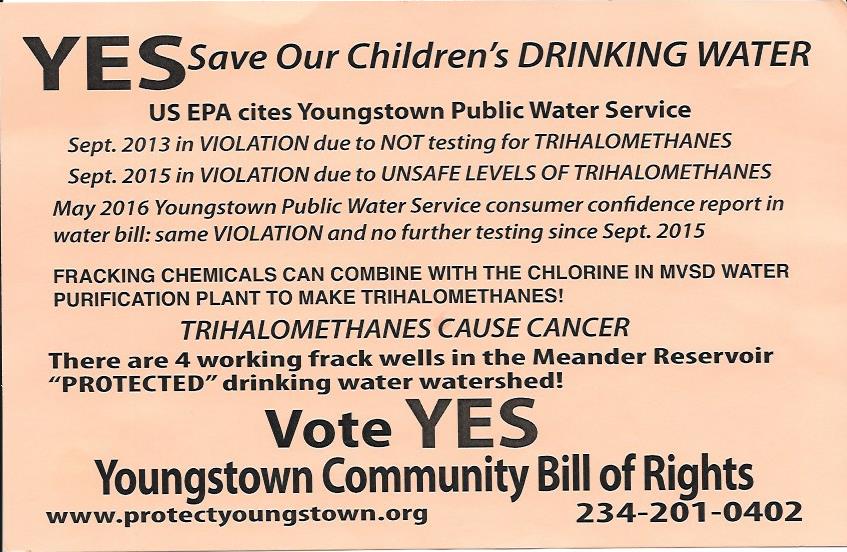 In response, the City of Youngstown Mayor debunked this argument. As the Youngstown Business Journal reported:

As for the safety of the water residents drink, Youngstown is a distributor of the water the Mahoning Valley Sanitary District treats, the mayor pointed out. The accusation that the U.S. Environmental Protection Agency three times in the last three years notified the city “that our drinking water is in VIOLATION of safe drinking water standards [emphasis in committee’s packet]” is another incomplete truth, McNally said. The U.S. EPA notified the city only once,” he said, and the notification was “not related to injection wells or fracking.”


Once again, the community has pushed back on the so-called Community Bill of Rights. Each time “Frick and Frack” put up another ballot measure, the coalition against them just seems to grow larger and larger. This is one issue where Republicans, Democrats, business, and labor all agree—the Community Bill of Rights is a bad idea. And while we know it is a bad idea, it’s certainly fair to say that the people who live and work in the Mahoning Valley are fed up with abuse of their city, calling it an “attack on jobs. It’s ridiculous, irresponsible, and was not written by people here but outsiders.” 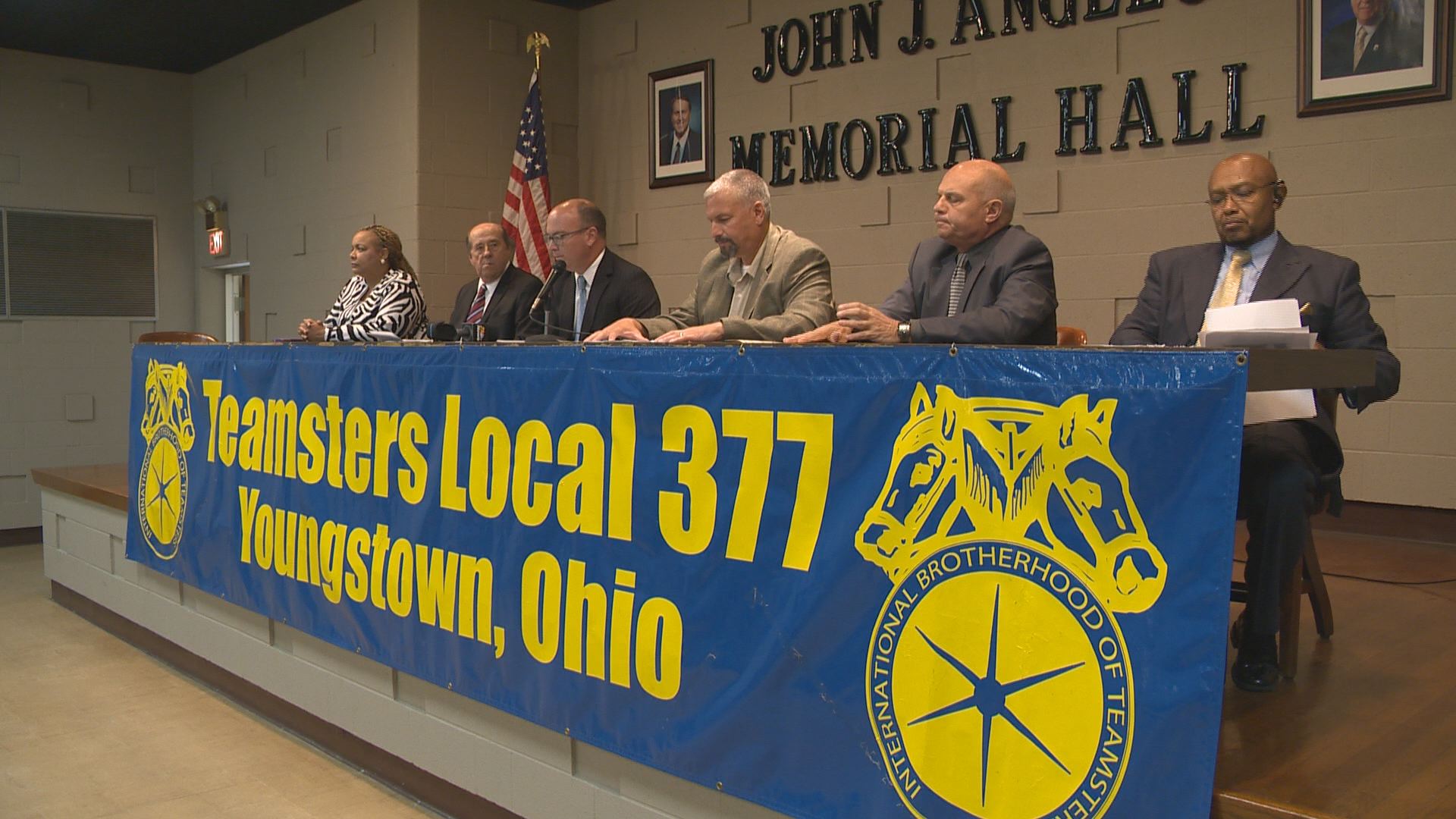 “If this destructive bill passes, it will devastate our local contractors and local [union] members” and said the amendment “is a waste of money and resources.”

City of Waterville: Issue 3 Community Bill Of Rights
CELDF Launches Campaign in Waterville
In May, CELDF put out a press release announcing they were behind the petition drive to put the Community Bill of Rights on the ballot of the City of Waterville. While no Utica shale development is occurring in our around Waterville (which is just outside of Toledo), they are pushing a so-called Community Bill of Rights misinformation campaign in an effort to attempt to block a pipeline. The proposal was initiated after a planned FERC pipeline project was announced, but as is evident from the activist activity on social media, they are clearly against all industry development of any kind.
City Law Director Warns Ballot Measure “Will Not Be Enforceable”
In June, the city law director warned that placing the measure on the ballot “will not be enforceable.” His comments at a city council meeting were as follows,

“Mr. Dombey stated that the amendment, if patterned after the Broadview Heights, Ohio, Community Bill of Rights, would not be enforceable or constitutional.  He quoted a decision by the U.S. Supreme Court in Morrison vs. Beck Energy Corporation, which affirmed that state statues pre-empt conflicting local ordinances.  He added that local municipalities cannot overrule federal or state exemptions or the interstate commerce clause.”

CELDF Misinformation Campaign
After announcing the campaign in Waterville, CELDF’s appears to have helped set up a community group calling themselves, Protecting Air in Waterville (PAW), led by a local activist, David Bourland, who incorrectly stated at a city council meeting in June,

“If the amendment were passed, it would ban the Nexus Gas Transmission and future pipelines and compressor stations in the City.”

Of course this is a well-established talking point from CELDF, and has been used frequently in the failed misinformation campaign in Medina County.
Pipelines are regulated and decided upon by the Federal Energy Regulatory Commission (FERC), the state through the Ohio EPA, which makes the local measure therefore unenforceable. As the Ohio EPA recently reported,

“The Ohio EPA thoroughly reviewed and responded to the public’s comments and reviewed the company’s application to ensure that emissions would comply with federal and state air pollution control standards, laws and regulations”

“The name ‘community bill of rights’ is deceiving. When those supporting the proposed charter amendment described it to me, it sounded like a good idea. But when I actually read the language, I realized the measure is poorly written, and so overly broad that it could take control over our own property-keeping us from trimming our trees, fertilizing and grooming our lawns, and tending to our property as we see fit.”

Like all CELDF’s “rights of nature” campaigns, Issue 3’s language is very broad – and while the pipeline in question would not be impacted by the passage of the Community Bill of Rights, a host of other industries would be. The oil and natural gas industry, in all its forms, is simply a way for CELDF to raise money, encourage frivolous lawsuits, bankrupt communities, and attempt to take personal property rights from taxpayers. Once educated, it’s clear that communities, like Waterville reject this misinformation campaign. As Phyllis Hyder, board member with the Waterville Economic Development Corporation said,

“Issue 3 subjects all local companies and developers to the threat of costly and time-consuming lawsuits. What company would want to invest in our city when they could be slapped with a lawsuit as soon as they break ground or operate?   The current and planned development at Waterville Landing, for example, could violate the measure and could be stalled or shut down completely if this dangerous measure passes. We can’t be fooled by the false hope an out-of-state group is selling. Issue 3 cannot stop the NEXUS pipeline or the compressor station which are governed by state and federal law. But what Issue 3 will do is hurt local Waterville companies and families.”

Local business leader, Dave Boothe really nailed the entire strategy of CELDF’s misinformation campaign in Waterville and in all the areas they attack, when he said,

“We’ve been told that Issue 3 was drafted by Waterville residents, but a little research online reveals that it was actually drafted by a group of anti-development activists out of Pennsylvania that are pushing this measure and their agenda across the county. The Pennsylvania author of the proposed measure was quoted in Reuters as saying ‘if a town goes bankrupt trying to defend one of our ordinances, well, perhaps that’s exactly what is needed to trigger a national movement.’ Broadview Heights, Ohio passed a similar measure, was sued, and lost. Let’s learn from their experience and not make the same mistake for our community.”

Conclusion
It’s clear that these two anti-fracking campaigns face an uphill battle on Election Day as Ohio voters continue to reject these ideologies. It highlights growing trend from activist groups of staging anti-fracking campaigns in areas where no horizontal drilling and hydraulic fracturing is even occurring, a point recently made by the Wall Street Journal.  Whether we’re talking about misinformation and scare tactics around pipelines, compressor stations, or natural gas fired power plants, the end-game is all the same: these groups simply want to “Keep It in The Ground,” and ban-fracking across the country. Ohio voters have rejected this 83 percent of the time and it appears that trend will only continue in Youngstown and Waterville.