US Shale Industry Credited with Driving 10% of US GDP Growth


The shale industry alone drove 10 percent of the growth in the U.S. economy’s gross domestic product from 2010 to 2015, according to a new study by the Federal Reserve Bank of Dallas showing how oil and natural gas deliver wins for the larger economy.
During the same years, crude oil production jumped from 5.5 million barrels per day (bpd) to 9.4 million bpd, notes the Journal of Petroleum Technology. This surge in output brought massive economic benefits to regions experiencing shale industry growth, and spread economic benefits throughout much of the country:

“As the shale boom flooded the market with light crude, oil and oil-product prices declined, refiners took in as much domestically produced light oil as they could, and oil imports declined nearly 2 million B/D. Fuel prices in the US and abroad fell 14% as consumers benefited from free trade in refined products…”

As the following graphic from the Dallas Fed shows, the shale industry grew rapidly from 2010 to 2015, and since then its output has risen to new heights. Altogether, the United States produces more than 12.2 million bpd of crude oil alone, largely from shale basins. As a result, the Dallas Fed concluded that a “decline in [oil] imports generated a major improvement in the trade balance for oil, amounting to about 1 percent of GDP.” 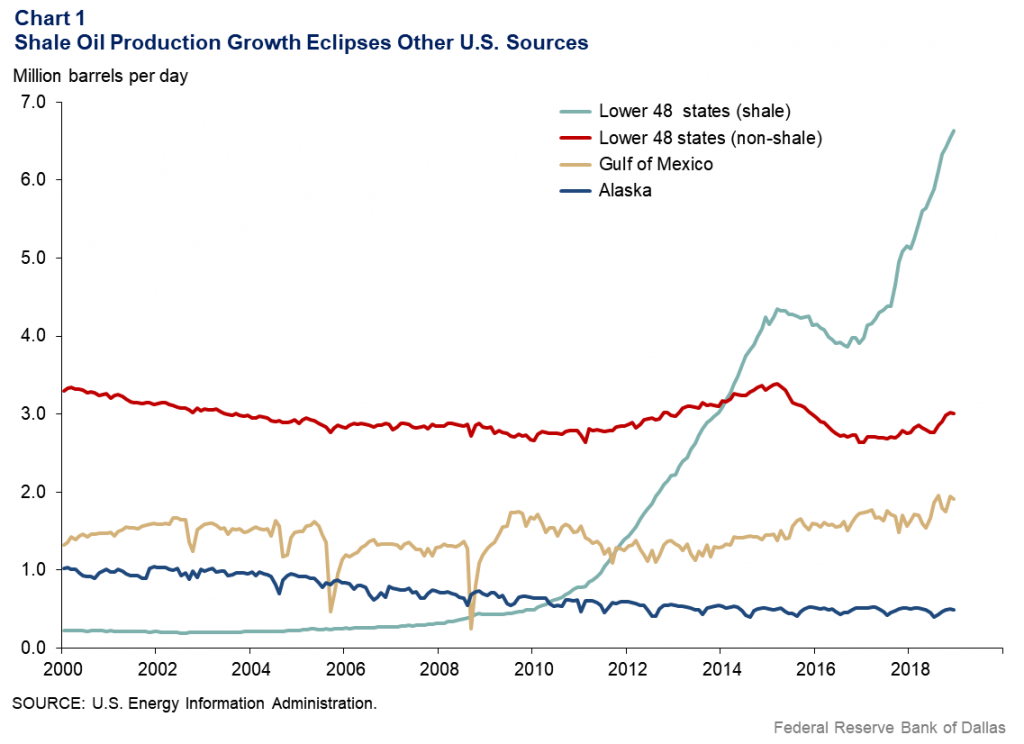 The shale revolution has also driven tremendous growth in American natural gas production leading the International Energy Agency to forecast that within a few years, the United States will become the world’s top liquefied natural gas exporter. America is already a net exporter of natural gas, a sharp turnaround from many years of being one of the world’s top importers.
Reporting on the Dallas Fed’s research, the Journal of Petroleum Technology notes that increased domestic shale oil and natural gas production led to lower energy prices for U.S. consumers, who in turn used their cost savings to increase other types of consumption spending by 0.7 percent , and households were able to consume 3.6 percent more fuel because its price dropped so precipitously. Additionally, the JPT found, “Not only did households benefit from having more disposable income due to lower fuel prices, but industries were able to boost their output of non-oil-related goods and US aggregate investment rose.”
States with the highest shale production also enjoyed massive employment growth. For example, the Dallas Fed calculated that North Dakota experienced annual job growth of 5.3 percent and Texas employment rose 3 percent from 2011 to 2014, beating the U.S. average of just 1.7 percent during that time span. Other states, such as West Virginia and New Mexico, have experienced tangible economic benefits as well.
The Dallas Fed concludes its study by putting the results of the shale revolution in context:

“Given that the actual increase in U.S. GDP was 10 percent over the [2010 – 2015] period, the shale boom accounted for one-tenth of the overall increase. Although the oil sector makes up less than 1.5 percent of the economy, our results suggest that the shale boom generated significant positive spillovers.”

The positive spillovers are all but certainly continuing, and likely growing, benefiting the U.S. economy even more. In 2018, the United States became the world’s top producer of oil and gas, an achievement that would not have been possible without the development of shale energy resources.
There are already strong signs that the shale industry’s economic engine is continuing to accelerate. In 2018, oil and gas extraction contributed $218 billion to the U.S. economy, according to the National Bureau of Economic Research. Meanwhile, the United States has achieved massive reductions in greenhouse gas emissions, largely thanks to the rising use of natural gas, replacing other fuels that cause greater emissions. The rising use of natural gas to power the U.S. electrical grid has helped America become a global leader in emissions reductions among all developed economies.
Fracking 2019