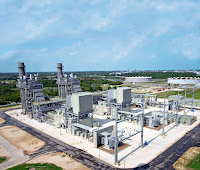 From the Daily Jeffersonian:


Efforts are on course now for a March groundbreaking for work on the planned Guernsey Power Station, said Norm Blanchard, executive director of the Cambridge-Guernsey County Community Improvement Corporation.

Blanchard conferred on Monday morning with Mary and Michael King who are spearheading the power plant development efforts. The plant is expected to produce 1,650 megawatts of electricity, which would be enough to power about 1.5 million homes.

The timetable for beginning work on the project has been moved back several times. That has happened because of the many variables with which the Kings have had to contend.

Each power plant project entails its own unique challenges.

For the Guernsey Power Station, that challenge has been simply its unexpected complexity. Factors that had to be faced included the site’s proximity to Interstate 77, environmental matters because of the wetlands designation on the planned site and the fact that the area — like much of Guernsey County — sits atop a honeycomb of old, abandoned coal mines.