PTT Global Chemical America LLC (PTTGCA) announced today in a press release that it is teaming up with South Korean construction and chemical company Daelim Chemical USA, LLC, on its proposed $6 billion world-class petrochemical complex in Belmont County, Ohio. The company also announced that it will make its final investment decision on the cracker facility “by the end of 2018.”  This comes after PTTGCA announced last month that additional news would be forthcoming, which initially garnered headlines citing only “delays” of the project, today’s announcement is a signal that Ohio is “all in” to secure this multi-billion project, which would create thousands of jobs.
EID has been tracking the timeline of the PTTGCA decision compared to the Shell Chemical Appalachia timeline, and as you can see, it’s clear that the PTTGCA timeline is strikingly similar. 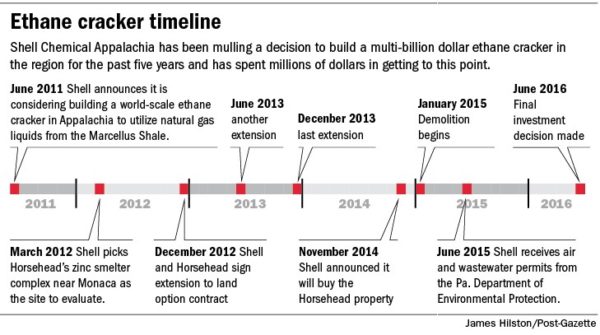 According to the Pittsburgh Post-Gazette, Royal Dutch Shell announced it would consider building an ethane cracker in 2011, and five years later the company announced a final decision had been made.
Assuming PTTGCA keeps its promise and announces a favorable final investment decision this year, the PTTGCA project decision would actually come a year sooner than then Shell project.
So what is the significance of this news about Daelim?
The significance is huge and in fact mirrors so many other successful projects in Ohio in which a project is announced by a developer; the company begins the necessary process of due diligence, engineering studies and environmental permits; and then at some point in the process they announce a construction partner. In this case, the addition of Daelim Chemical USA, LLC to the project is enormous, considering it is a subsidiary of Daelim Industrial, one of the top Engineering, Procurement, and Construction (EPC) companies in Asia and one of the largest companies, period, in South Korea. In other words, adding Daelim to the project should be viewed as a very positive sign that Ohio will in fact secure this final investment decision this year.