A new Cleveland State University (CSU) report entitled “Shale Investment Dashboard in Ohio” finds total Utica Shale investment topped $50.4 billion from 2011 to the summer of 2016. That total includes $38.8 billion in upstream investment by oil and gas operating companies, $8.1 billion in midstream projects and $3.3 billion in downstream investment during that timespan. Remarkably, these figures could prove to be conservative, as several recent and/or relevant projects were not included in the report.
Researchers from CSU and Youngstown State University arrived at their findings by using industry interviews and publically available data prepared for JobsOhio, a private, nonprofit corporation that promotes job creation and economic development for Ohio.

The methodology for CSU’s upstream investment estimate focused on one-time land investments, drilling, roads and gathering lines, the cost of storage, processing and disposal of produced water, lease bonuses and royalties paid to mineral rights owners.  The report acknowledged that “upstream investment in Ohio has slowed dramatically” as a result of the recent low commodity price environment for oil and natural gas. But despite the fact that rig counts have fallen by 313 percent in just two years, Ohio’s oil and gas operators have still collectively spent nearly $40 billion. According to the report, drilling has directly and positively impacted the counties where development has taken place, with oil and gas operators spending over $21 billion in Ohio’s Utica Shale counties, more than 96 percent of which has been invested in Ohio’s top eight producing counties: Carroll, Belmont, Harrison, Monroe, Guernsey, Noble, Columbiana and Jefferson.  This $21 billion spent does not include royalties, bonuses for undeveloped acres and lease operating expenses. Nor does it include the taxes paid by operators. This is noteworthy, as Ohio’s oil and gas operators have paid more than $45 million in ad valorem taxes, in addition to sales taxes, severance tax, income tax, and fuel use tax. All of this investment has come directly from unconventional drillers, and as the report stated,

“Carroll County continues to be leader in investment to date by wells, led by Chesapeake Exploration.”

CSU’s report estimates Chesapeake has spent an astounding $7.3 billion in Ohio, excluding additional spending on royalties, lease operating expenses, bonuses for undeveloped acreage and taxes. Other shale operators have been pouring investment into the state as well and, as EID recently reported, Ohio has much to gain from royalty payments, as is obvious by the $1.6 billion in estimated royalties paid on production of minerals.
The vast majority of these payments have been to private mineral owners, not from leasing of state lands. As EID recently highlighted, leasing federal and state lands can be a major boost to tax revenues and royalties for Ohio. In fact, if we assume the 41,697 acres owned by Ohio Department of Transportation and the Ohio Department of Natural Resources were developed, that acreage alone could mean up to $160 million in bonus payments for the state. This income would surely add significant revenue to address Ohio’s budget issues. 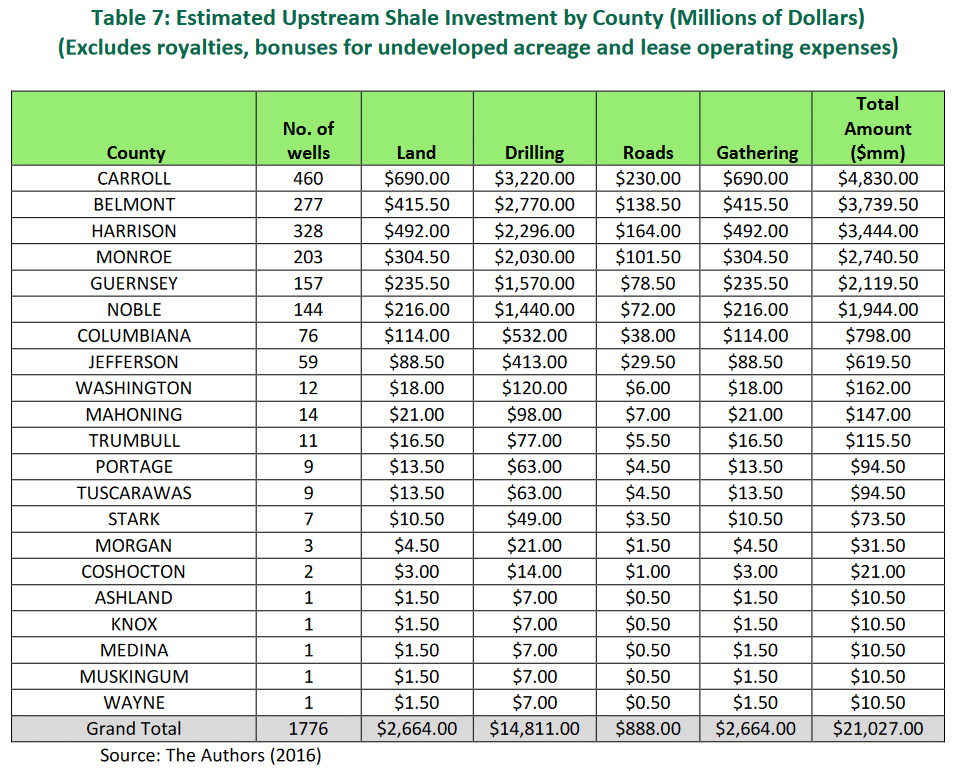 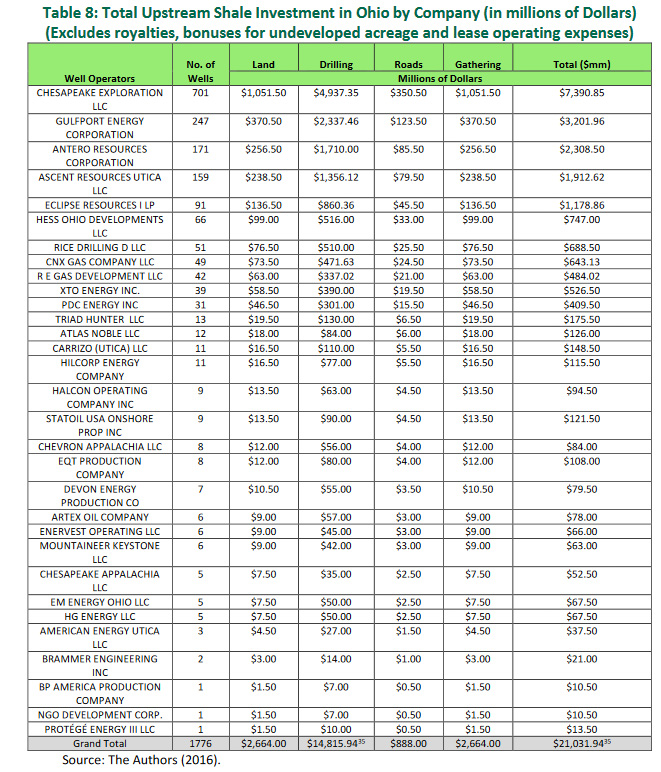 Of course without fracking and upstream activities, you would not need midstream investments such as pipelines, gathering and interstate systems. Therefore, the midstream natural gas processing and infrastructure investment detailed in the report is entirely derived from Utica Shale development.  The CSU study examined estimated midstream investment from 2011 to the Summer of 2016 in six key categories: gathering lines, processing plants, fractionation plants, storage tanks, railroad terminals and interstate transmission lines. Together, they have accounted for $8.1 billion invested by the oil and natural gas industry. However, the CSU study only accounts for three interstate natural gas pipelines — Leach Xpress, Spectra OPEN and Equitrans Ohio Valley Connector — all of which are either completed or near completion, accounting for $2.35 billion.  CSU did not account for the NEXUS project or Energy Transfer’s Rover pipeline, which would add another $5.8 billion to the investment column. These projects together are slated to bring $256 million in new tax revenues.

Together, investment made in Ohio by “downstream development,” has been approximately $3.4 billion, according to the report. However, similar to their midstream analysis, this does not take into account several noteworthy “proposed” downstream investments, such as the $5 billion PTT Global Chemical ethane cracker and approximately $7 billion in additional natural gas fired power plants. If these projects come to fruition, this segment investment would swell to $15.4 billion!

Perhaps the most unsung development Ohio has realized since shale development took off has been the natural gas refueling stations sprouting up all over the states and the incredible conversion of boilers from other fuel sources to natural gas to natural gas. In just five years there have been 37 natural gas refueling stations constructed, adding $37.6 million of new investment. Notably, four new LNG refueling stations and a new Stark County hydrogen refueling station were not included in the report, which would another $2 million to the tally.
From our perspective, the most surprising (and exciting) data in this report was found in the analysis of natural gas-fired combined heat and power plants. Over the past four years, billions have been spent in converting old boilers with new technology to burn natural gas. Some of the projects were included in the CSU report, but others such as Cleveland Thermal, MillerCoors Brewing Company and Wright Patterson Air Force Base were not included. The CSU report has approximately $4.5 million accounted for in its Combined Heat and Power Plants investment tally, but this list doesn’t include these additional significant investments, which would add another $34 million to the stack. 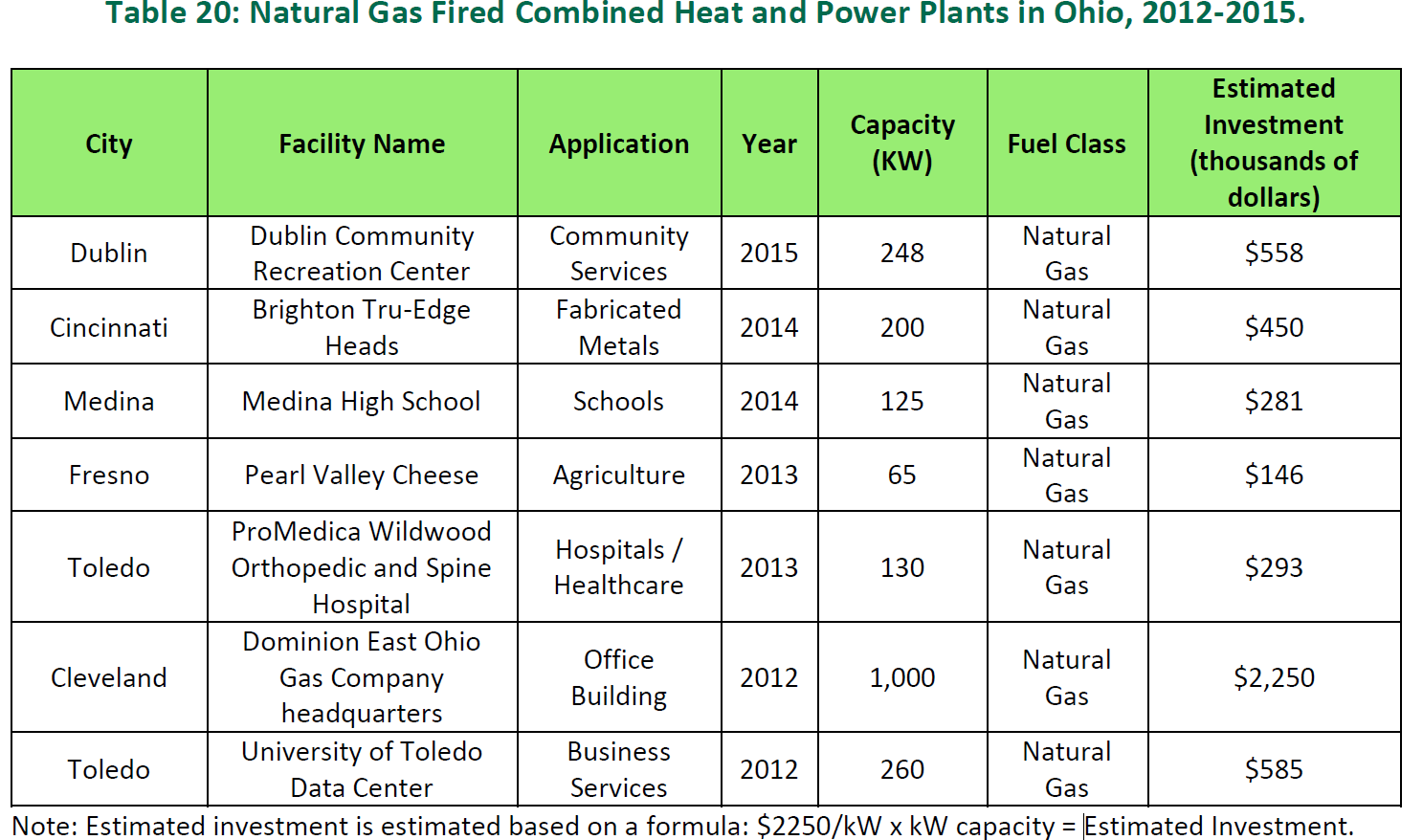 What’s more, the millions invested in converting these boilers to natural gas means significant improvements in air quality for Ohioans.
For example, Cleveland Thermal’s conversion — which will yield an 84 percent reduction of carbon dioxide emissions — equates to planting a dense 19,000-acre forest. MillerCoors Brewing saw a 37 percent reduction in greenhouse gas emissions, an 88 percent reduction in nitrogen oxide emissions and a 96 percent decrease in sulfur dioxide emissions after its conversion last year.  And the Wright Patterson Air Force Base’s switch to natural gas is expected to eliminate 1,000 tons of sulfur dioxide emissions, 200 tons of nitrogen oxide emissions, five tons of particulate emissions and 290,000 tons of greenhouse gas emissions, helping the base to meet Clean Air Act regulations while saving the Air Force base $2 million a year in fuel costs. These natural gas conversions have paid off for both the environment and economy in southwest Ohio, where motorists have been on the hook for 12 cents more a gallon on gasoline purchases during summer months in exchange for not having to participate in the E-check vehicle emission program. This year — thanks to fracking and natural gas conversions by MillerCoors and Wright Patterson Air Force Base, Cincinnati and Dayton motorists are slated to see $44 million in savings, as the region has finally met the air quality standards, ending the summer fuel hikes imposed on area motorists. As Ohio EPA Director Craig Butler recently said of these developments,

“You get a really big picture perspective of how much success we have seen over the years in improving air quality.”

Yes, we have — thanks to fracking and clean burning natural gas. What policymakers at both the federal and state level need to understand, and Ohio has proven, is that the shale revolution is not just a win for the economy — it’s a win for the environment, too. Thanks to fracking, Ohioans do not have to choose between stable jobs or clean air. We can enjoy all of the benefits that a thriving economy brings and breathe easy while doing it.