This week the Bureau of Land Management (BLM) hosted an online competitive auction sale of federal minerals located under the surface of the Wayne National Forest. The BLM auctioned off 719 acres for a total sale of over $1.7 million. On average, each acre sold for $2,416.85.
More importantly, the local government will see a portion of this sale, as well as a portion of the royalty payments. In this case, the sale included leases with a royalty requirement of 12.5%.
Because the Wayne National Forest is public land, the area does not benefit from the revenues of private property taxes, which typically support schools, roads, bridges, and government services.  Monroe County in particular has to grapple with this as Wayne National Forest covers tens of thousands of acres. Instead of property tax payments, the Bureau of Land Management instead pays Payment in Lieu of Taxes (PILT) to counties that contain the forest.
Here’s how it works: Funds are returned to the states annually and then distributed to the counties based on national forest acres within the county, (a system which has been in place since 1908).  So, for Monroe County, leasing federal minerals in the most prolific dry gas region of the state will in fact be a windfall for local governments over the next few years.  For example, take a look at the receipts in 2014 from the national forest to Monroe County. As you will clearly see, they received no money from federal minerals as there was no development then. 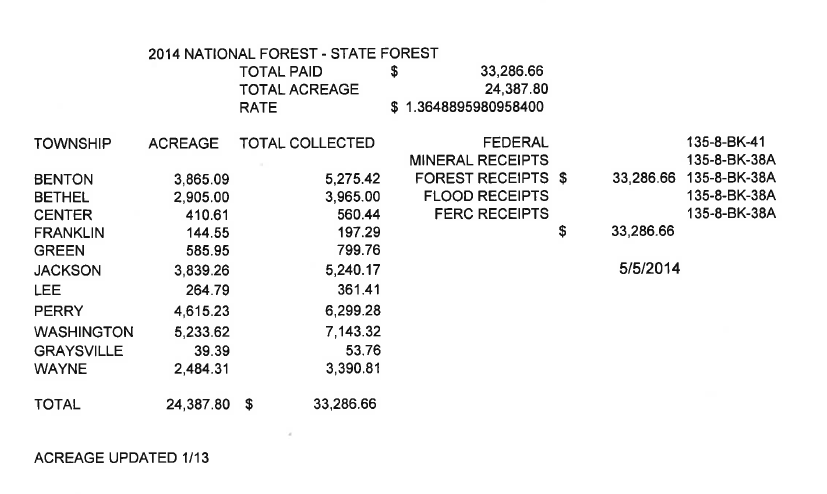 With WNF leasing going ahead, all that will change for Monroe County
Perhaps that’s why the Monroe County Commissioners, local schools, landowners, and practically everyone in the county supported leasing the Wayne in the first place. Not only have they watched their sales tax revenues increase by 340 percent from oil and gas development on private lands, they are going to realize a boost from leasing county public lands as well.  As the bi-partisan Board of County Commissioners in Monroe County said in a support letter to lease minerals in the Wayne,

“Since 2008, mineral development has generated more than $460,000 for local governments in 2014, Monroe County received $33,286 in PILT, of which there was no monies received from federal minerals. Sir, in addition to our concerns over lack of PILT payments, we also find this matter concerning from a perspective of “The Secure Rural School and Community Self Determination Act of 2000”, which is another source of funding received from the Wayne National Forest that provide payments to fund important local services, such as schools and roads. Delay and/.or a determination by BLM that would impeded Monroe County’s ability to realize additional funding from these sources would not be in the best interest of the county”.

Indeed, it would not be. Once again, taxpayers are the winner when it comes to development of oil and gas in Ohio!