It’s been a rough road for Ohio public schools. In February the Washington Post headlined a story entitled, “The education mess in Ohio under Gov. John Kasich,” outlining the fact that traditional public schools, which make up 90 percent of the schools, are receiving  $515 million less state funding than they did in 2010.  As result, school districts have been forced to invoke levies on their districts asking residents to pay more property tax to make up the shortfall.
But now, thanks to fracking and infrastructure projects coming online, such as the over $8 billion in pipelines and $7.8 billion in natural gas-fired power plants, local schools are about to receive $270 million (per year) – not from taxpayers – but from the oil and natural gas industry.
Utica Shale to the Rescue
According to an August 2015 report by the progressive think tank Innovation Ohio, public schools rely almost exclusively on property taxes. But with the cuts realized over the past five years, communities have been forced to levy the income their local residents to make up for the shortfall. In fact, according the report, the cost of local school levies has jumped 34 percent over the past five years, costing taxpayers $10 million more than they otherwise would have had to spend. Well, starting in 2017 for many Ohio school districts and local taxpayers, that landscape will be changing—thanks to the development of the prolific Utica Shale. As Superintendent Dr. David Quattrochi said,

“We are building a new school without going to the taxpayers for a levy.” (Emphasis added)

Last year EID produced a report with some projections on the amount of taxes that would go to local schools. At that time, we predicted conservatively that Ohio schools would see $256 million, per year, while the FERC regulated pipelines are in service.  However, many of the companies we projected had not issued reports with their final numbers.
At the same time, natural gas power plants have been sprouting up all over the state. Starting next year many of these companies will begin to pay local property tax. The updated numbers now show Ohio schools are slated to receive $270 million each year the pipeline is in service and for several years from the power plants as well.  (The yellow highlighted boxes represent formal announcements directly from the company.) 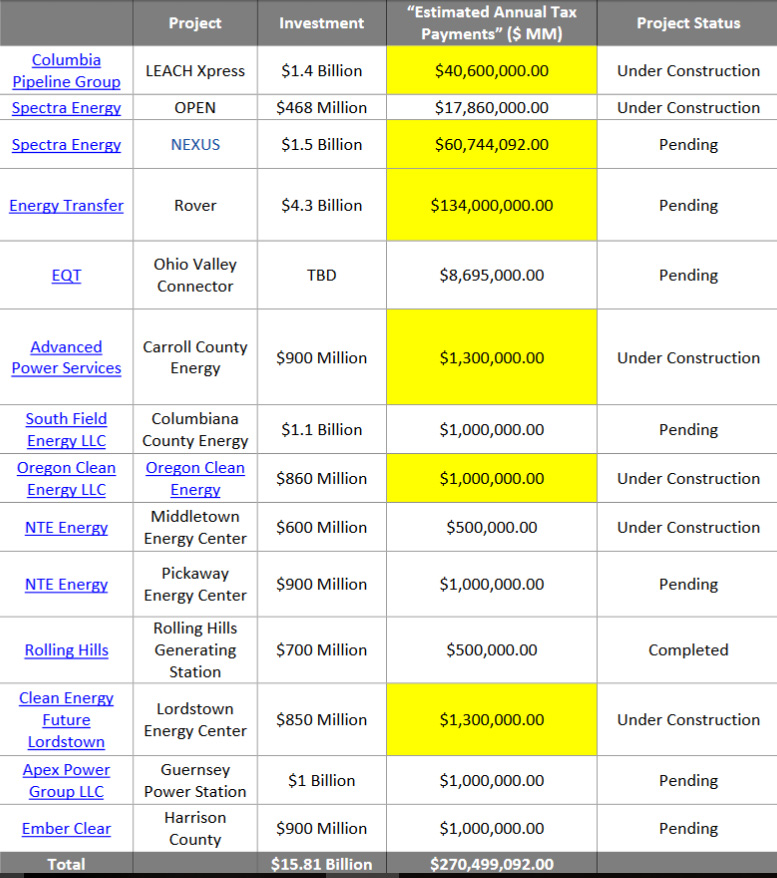 The vast majority of the schools receiving a hand-up are in rural areas and one rural school in particular is about to get a major boost. United Local Schools are slated to receive a $18.9 million over five years, which will make up 28.5 percent of their overall budget. This is significant as just a few years ago, the same school district had a levy rejected twice, as the local new station, WFMJ reported,

“United Local Schools were hoping to pass a bond to provide $9.75 million of local funds to match a 79% state contribution for renovations. It was defeated for a second time, and now the district must find a way to maintain a 60-year-old building. Without new levies, no new money would be coming in for 2012, despite deep cuts in state funding.” (Emphasis added)

After these two defeats, the school district gave up and has been living with a 60-year-old building ever since. Now, just a few years later, the school will receive millions, but not on the back of taxpayers this time.
In response to this new, Ohio State Representative Tim Ginter told EID,

“The NEXUS Gas Transmission project will provide an estimated $33,004,781 to Columbiana County in the first five years of operation. These funds will not only help the county, but also four of our local townships, the Columbiana County JVSD, and United Local Schools. The estimated tax revenue for United Local Schools in year one alone is $4,067,868. These funds will give United Local Schools a wonderful financial boost and the ability to continue to offer excellent educational opportunities for their students. This pipeline will provide the much needed infrastructure to ensure the successful transfer of oil and gas in our region. Columbiana County will play a crucial role in this project that will impact the economy of the entire state of Ohio.”

2017 is going to be a banner year for Ohio schools in areas where oil and gas are occurring. Of course pipelines and natural gas fired power plants are not possible without the prolific natural gas production we have coming out of the Utica Shale. So we can thank fracking for fueling our schools! Without shale, Ohio would still be suffering from budget cuts.