Over the last several months, the federal Bureau of Land Management (BLM) has been deliberating whether to offer 40,000 acres of minerals located in Monroe, Noble, and Washington Counties in Ohio for competitive lease sale for oil and natural gas development under the surface of the Wayne National Forest (WNF). Last week the agency released its long-awaitedEnvironmental Assessment (EA) announcing that it found “no significant impact” that would result from a decision to move forward with these lease sales. An Athens News headline put it well explaining, “Leasing to drillers won’t hurt national forest.”  Specifically, District Manager Dean Gettinger of the BLM said,

“Based upon a review of the EA and supporting documents, I have determined that the Proposed Action is not a major Federal action, and will not significantly affect the quality of the human environment, individually or cumulatively, with other actions in the general area.”

While the final EA will not be issued until public comment has been accepted for the draft, this is welcome news.
BLM is mandated by federal law to develop our nation’s minerals, under the Mineral Leasing Act of 1920, the Federal Land and Management Act of 1976, the Federal Onshore Oil and Gas Leasing Reform Act of 1987and the Energy Policy Act of 2005.  According to the WNF document, the BLM clearly states that,

“The leasing of federal mineral is vital to the United States as it seeks to maintain adequate domestic production of this strategic resource. The oil and gas leasing program managed by the BLM encourages the sustainable development of domestic oil and gas reserves which reduced the dependence of the United States on foreign sources of energy as part of its multiple-use and sustainable yield mandate.” (emphasis added)

The U.S. Forest Service (FS) and the BLM have a very long history involving oil and gas development. The WNF has been managing drilling for nearly a century and continues to do so today with over 1,200 active wells on the surface of national forests.
Property Rights Are At the Heart of the WNF Debate
Unlike most other national forests, the WNF is not comprised of contiguous acreage. It is a patchwork of acreage adjacent to privately held minerals, and even encompasses private minerals under the surface of the WNF. In fact, 59 percent of rights to the minerals beneath the WNF are actually privately owned and scattered throughout the forest. This makes it virtually impossible for private landowners to have their minerals developed if federal leasing is not allowed. Given this unique “split-estate” scenario—where the federal government owns the surface rights and private landowners own the minerals beneath the majority of land—it is easy to see how this debate is really one that centers around property rights.
This focus on property rights was especially clear over the last few months as landowners turned out in force when the national Keep It in the Ground movement parachuted into local communities, disrespecting our laws, our regulators, and most importantly the local men and women who actually live and work in the Buckeye State.  Throughout the rounds of public meetings that resulted in over 3,400 public comments, landowners, elected officials, unions, economic development groups, and concerned citizens stood up against the Keep It in the Ground organizers. These locals told BLM they support leasing in the forest and the protection of their property rights.  They asked the agency to base its decision on sound science and facts instead of the emotional rhetoric coming from outsiders that don’t speak for them.
Latest EA Shows Local Voices Were Heard and Science Trumped Rhetoric
At the end of the day, it appears the BLM not only heard these voices, but also took into consideration discussions held with native tribes, and consultation and external scoping with other coordinating state and federal regulatory bodies. The result is an Environmental Assessment that is extremely comprehensive and lays out a compelling case as to why leasing should be permitted to move forward.
Further, the EA also found that the Proposed Action is in compliance with the Final Revised Land and Resource Management Plan, Wayne National Forest (2006 Forest Plan), which incorporated a Supplemental Information Report (SIR) that was added to the plan in 2012. This should not be surprising for anyone who has actually read the SIR given that the most recent EA was essentially conducted as an added layer to already existing environmental reviews that had been previously made by the U.S. Forest Service, the Wayne National Forest, and the Bureau of Land Management. Recalling that activist groups completely discounted the SIR and its merit only a few months ago when they submitted their comments, it’s clear their case did not hold water, yet again.
Table ii highlights the potential impacts leasing in WNF (Proposed Action) would have on forest resources. Obviously, by not allowing leasing (No Action Alternative) there would be “no effect” to these resources, but also notice that there are “no direct impacts from leasing” on every one of them, resulting in “minor cumulative impacts” overall to the forest system. 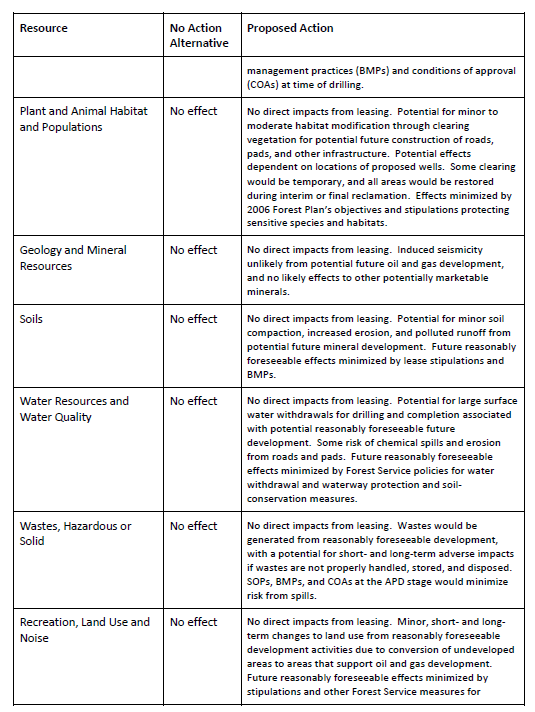 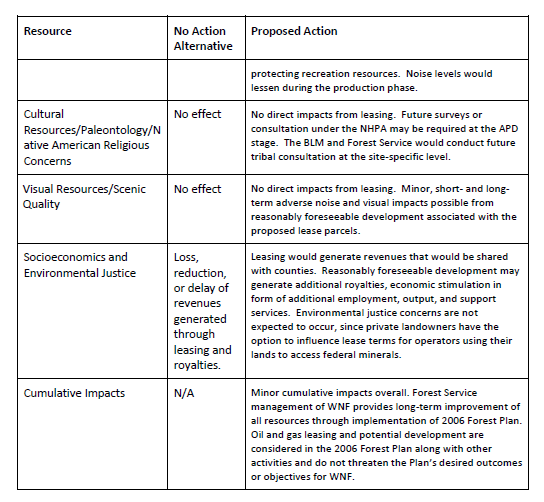 Now, also on the chart is a category for the ‘Socioeconomic and Environmental Justice’ impact to the forest.  Unlike the other categories highlighted in the above, in this section, which was included following intense public outcry from landowners, BLM found that there will in fact be negative impacts if leasing is prohibited. According to the BLM the decision not to lease would result in:

“Loss, reduction, or delay of revenues generated through leasing and royalties.”

BLM goes on to say that should leasing be allowed,

“Leasing would generate revenues that would be shared with counties. Reasonably foreseeable development may generate additional royalties, economic stimulation in form of additional employment, output, and support services. Environmental justice concerns are not expected to occur, since private landowners have the option to influence lease terms for operators using their lands to access federal minerals.”

In other words, oil and gas development within the WNF would have very minor, if any, environmental impacts, yet would be a huge benefit to the local economy.  The BLM’s recent decision to move forward with leasing through their Proposed Plan is in fact consistent with its mandate from Congress, and is what would be expected with findings such as this.  An added bonus is that this decision comes after the majority stood up to the national (and international) groups that are calling the shots behind the Keep It In The Ground movement.  After all, as the Department of Interior Secretary Sally Jewell recently pointed out,

“We are a nation that continues to be dependent on fossil fuels… It oversimplifies a very complex situation to suggest that one could simply cut off leasing or drilling on public lands and solve the issue of climate change.  You can’t just cut it off over night and expect to have an economy that is in fact the leader of the world.”