Removing oil and natural gas from the U.S. energy mix could have dire consequences, costing the country $4.5 trillion – or $35,000 per household – according to a new report from energy consulting firm Wood Mackenzie:

“For any country to embrace a nationwide transition to 100 percent renewable energy (RE100) or zero carbon (ZC100) emissions constitutes a massive disruption with far-flung economic and social repercussions.”

As the report explains, in order to completely decarbonize by 2030:

“We estimate the cost of full decarbonisation of the US power grid at US$4.5 trillion, given the current state of technology. That’s nearly as much as what the country has spent, since 2001, on the war on terror. From a budgetary perspective, the cost is staggering at US$35,000 per household – nearly US$2,000 per year if assuming a 20-year plan.” (emphasis added)

This cost “includes everything needed to reliably produce and deliver clean energy to consumers”, which Wood Mackenzie estimates is about 1,600 gigawatts (GW) of new wind and solar capacity, and an additional 900 GW of storage capacity. For perspective, current wind and solar capacity is about 130 GW of the roughly 1,060 GW that make up the U.S. power grid’s nameplate capacity. Worldwide there is about 5.5 GW of storage capacity operational or under construction, according to the report. The estimate does not include additional supply chain costs that could result from the increased demand for things like steel and construction equipment.
Wood Mackenzie notes this would be an unprecedented shift:

“Today, no large and complex power system (LCPS) in the world operates with an average annual penetration of greater than 30% wind and solar (W+S). RE100 policies for an LCPS represent uncharted territory. There is little to no historical precedence for dealing with the technological and commercial disruptions that would accompany the mass deployment of variable energy resources.
“Current evidence shows that an LCPS tends to reach a 25% W+S market penetration with relative ease, assuming fundamental natural resource and grid infrastructure prerequisites. Beyond that point, operational and cost complexities progressively multiply, in large part due to the intermittent nature of renewables.” (emphasis added)

Aside from the abundance and low cost of natural gas, its ability to ramp up or down very quickly has made it popular for power generation. Without substantial battery storage, natural gas serves as an important back-up fuel for renewables because solar and wind power experience off-times and seasonal variation, as well as curtailments due to lack of storage capacity, which the report says happens almost daily in California.
As Energy Information Administration analyst Dr. Kathryn Dyl explained this year, natural gas has played an important role in ensuring grid reliability:

“That build-out of natural gas generation capacity on the grid led to the retirement of several coal generators, but also in many ways enabled the growth of renewables, because renewables — particularly wind and solar power — are intermittent or non-dispatchable resources. They only operate at certain times of the day or under certain circumstances and it’s really beneficial to be able to have complementary generation to be able to respond to that.”

Wood Mackenzie is not calling for a halt to increasing the U.S. renewable power generation capacity. Instead it acknowledges the complexity of the issue and offers a few more realistic suggestions than what has been called for by those supporting 100-percent renewable power by 2030, which ultimately would “require more capacity to be built every single year over the next 11 years than what has been installed collectively over the past two decades.”
The first two suggestions include slowing down to allow for technologies to be developed that could lower these costs and to give a more realistic time-frame. The last two are to include other fuel sources, namely nuclear and natural gas. In fact, the report finds that by including natural gas in the energy mix, the cost reductions are pretty substantial:

“Allowing 20 percent of the power mix to come from existing natural-gas-fired generation (ZC80) would reduce RE costs by roughly 20 percent and energy storage costs by at least 60 percent.” (emphasis added)

Natural gas helped the United States lower greenhouse gas emissions almost 73 percent from 1970 to 2017, according to the Environmental Protection Agency. The United States has also been a world leader in reducing carbon dioxide emissions, with the EIA attributing the accomplishment largely to the increased use of natural gas in power generation. 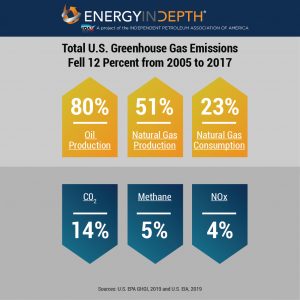 Wood Mackenzie’s report, and the consensus from governmental agencies is clear: natural gas provides a strong path to reach our climate goals.
Fracking 2019