By Rob Magee - March 13, 2019
The Ohio Department of Natural Resources has now released the production data from the Utica shale for the fourth and final quarter of 2018. As always, we are going to give you a look at how the numbers compare to past quarters, past years, and how they break down among the various drillers who are active in Ohio and the counties where they are drilling.  We also give you the top 10 oil and gas-producing wells of the quarter.

First, a quick note.  The ODNR news release says that there are 2,575 wells on the report and 2,241 of them reported some production.  But in examining the actual report that was released, only 2,241 total wells are listed, and 39 of those do not show any oil, gas, or brine produced.  So the numbers on this deep dive into the numbers will use what we were actually able to take from the report rather than what was listed in the news release.
PRODUCTION RATE COMPARISONS
First up, let's take a look at how the quarterly data compares from the first quarter of 2014 (which is when the ODNR began reporting quarterly data rather than one yearly report) through the final quarter of 2018. As a reminder, all oil figures are 42-gallon barrels, and all gas production is measured in MCF:

For the fourth consecutive quarter, oil production was on the rise.  In fact, the fourth quarter of 2018 saw the second-most total oil produced from shale in Ohio in any quarter over the past five years.  Of course, the production rates remained much lower than they were at their peak, although the 2,639 barrels of oil per well is the highest number since the third quarter of 2016.

Gas, meanwhile, continues to set a new peak for total production in each quarter.  Also, after a couple of quarters of production rates slowing a bit, the fourth quarter of 2018 also set new peaks for gas produced per well and per day in production. 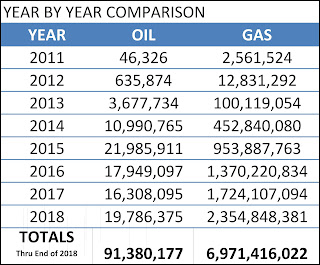 After trending up for the first three quarters, the strong oil production in the fourth quarter of 2018 results in a yearly total that ends the decline of the previous two years.  The 19,786,375 barrels of oil produced is the second-highest yearly total seen in the past eight years.  Gas, meanwhile, set yet another production peak and surpassed 2,000,000,000 mcf in a year for the first time.

Here are the top 10 oil-producing wells in quarter four of 2018:

As usual, Eclipse Resources dominates the list of the top 10 oil wells.  7 of the 10 wells are operated by Eclipse.  The Outlaw A 1H takes the top spot after being in 5th in total production during the third quarter, but the added total production isn't a surprise because that well had a production rate of 1,985 barrels per day in the third quarter and simply wasn't in production for as many days as some of the other wells on the list.
Here are the top 10 gas-producing wells from the quarter:

There's some interesting changes to this list as compared to the third quarter.  During quarter three, 9 of the 10 top gas-producing wells belonged to Ascent Resources (although Eclipse did hold the top spot with the Rolland C 5H well that was the fourth-highest producer of the fourth quarter).  In this quarter, though, Eclipse takes not only the top spot but also four more.  Ascent has four wells in the top 10, and Chesapeake Exploration sneaks into the tenth spot.

So, out of the twenty wells making up the top 10 oil producers and the top 10 gas producers, Eclipse Resources operates twelve of them.

Without much change in the well count during this quarter, some of the changes that might have been expected did not occur.  Carroll County continues to have the most wells in production by a small margin despite seeing no change to this number during the quarter.  Guernsey County continues to be the hot spot for oil, while Belmont County is the leader in total gas production and gas produced per well, although Jefferson County still edged it out in gas produced per day.

Eclipse Resources now has enough wells in production that it becomes the new leader in total barrels of oil produced.  Ascent Resources continues to lead the way in total gas produced.

Also, we see Encino Acquisition Partners, which acquired all of Chesapeake Energy's Utica shale assets in Ohio, make its first appearance on the production data summary under the name EAP Ohio LLC.
We hope you enjoyed this breakdown of the data.  You can view the spreadsheet from the ODNR containing all of the production data by clicking here.
Fracking 2019