By Rob Magee - July 16, 2018
The Ohio Department of Natural Resources has now released the production data from the Utica shale for the first quarter of 2018. As always, we are going to give you a look at how the numbers compare to past quarters, past years, and how they break down among the various drillers who are active in Ohio and the counties where they are drilling. We'll look at where the production numbers would end up for 2018 if they continue at the same pace as the first quarter. We also have the top 10 oil and gas wells detailed below.
PRODUCTION RATE COMPARISONS

First up, let's take a look at how the quarterly data compares from the 1st quarter of 2014 through the first quarter of 2018. As a reminder, all oil figures are 42-gallon barrels, and all gas production is measured in MCF:

Total oil production dropped for the first time since quarter four of 2016, while oil production rates - both by the well and by the day - hit a new low since quarter one of 2014 (remember, prior to that time production in Ohio was only reported on a yearly basis) for the second consecutive quarter.

Gas production, on the other hand, continues the streak of setting new high points for overall production and production rates.

One other notable thing that shows the slowdown in activity: this is the smallest quarter-over-quarter increase in producing wells we've seen since quarterly reporting began.  Only 30 more wells actually reported production this quarter than in the previous one, where the smallest increase previously seen was 34 from quarter four of 2016 into quarter one of 2017.  Only 52 more wells total were on the report, matching the smallest increase in that column previously observed (which was also from 2016 Q4 to 2017 Q1). 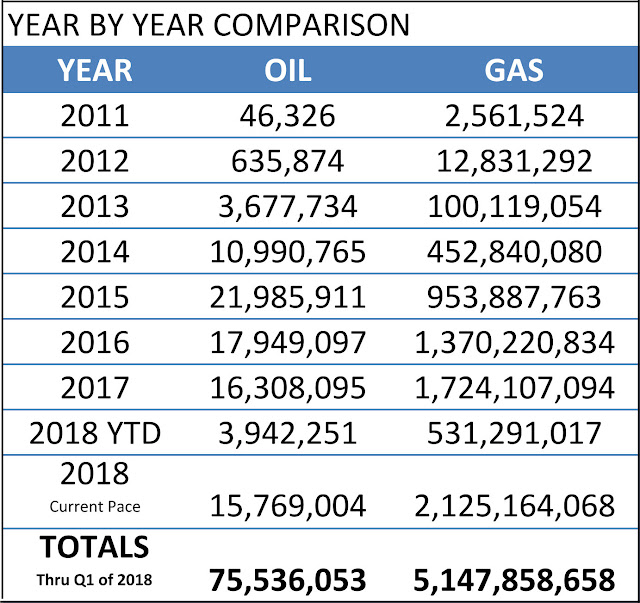 The oil production slowdown in the first quarter puts 2018 off to an early pace that would lead to the lowest overall oil production of the last four years.

The increasing natural gas production continues to be impressive, with things on pace for over 2,000,000,000 MCF of natural gas to be produced in 2018, the first time Ohio would see shale production hit that milestone.

Eclipse Resources dominates the list of top oil-producing wells yet again this quarter, with 7 of the 10 wells.  The top two wells in 2018 quarter one were the same two wells that topped the production list in 2017 quarter four.

Here are the top 10 gas-producing wells from the quarter:

Guernsey County continues to be the top spot for oil production, with the highest rates and overall output.

As for gas production, Belmont County continues to have the most overall production.  However, Jefferson County raced past it this month to be the highest producing county in terms of amount of gas per well and per day in production. 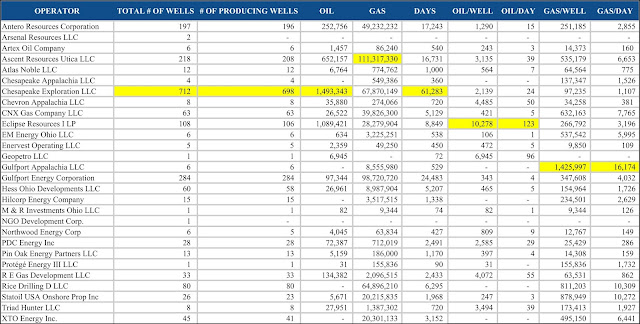 Gulfport Appalachia saw tremendous gas production rates in the first quarter of 2018, albeit from just six wells.  It claims the highest gas producers by rate from Rice Energy for the first time in a long time.

Eclipse Resources strong oil production showed up on the top 10 oil wells list, and it shows up again on this report.  Not only did it have the highest oil production rates, but it is only slightly over 4,000,000 barrels behind Chesapeake Exploration in total oil production despite the fact that Eclipse has only 106 wells with production compared to Chesapeake's 698.

We hope you enjoyed this breakdown of the data.  You can view the spreadsheet from the ODNR containing all of the production data by clicking here.