An Earthworks spokeswoman made a big gaffe in a small Oklahoma newspaper last month that confirms what experts have been saying for years about anti-fracking groups’ misleading use of “Forward Looking Infrared” (FLIR) images— they are devoid of scientific evidence and are specifically designed to scare the public in an effort to advance the “Keep It In the Ground” movement’s agenda.
Earthworks’ Hilary Lewis admitted during an interview with the Kingfisher Times & Free Press that FLIR images featured in an Earthworks/Coalition for Oklahoma Renewable Energy (CORE) reportoffered no scientific data to support the report’s claim that Oklahoma oil and gas sites “spew toxic pollution into the air, like an invisible oil spill.” As the Times & Free Press reported:

“No air quality tests were conducted in connection with the infrared drone photographs to quantify what amount of methane or other pollutants, if any, were being emitted at the named well sites.”

As the following new EID fact sheet illustrates, Lewis’ admission is just the latest — and potentially most damning — evidence that activist groups’ continued use of FLIR videos are intentionally misleading. 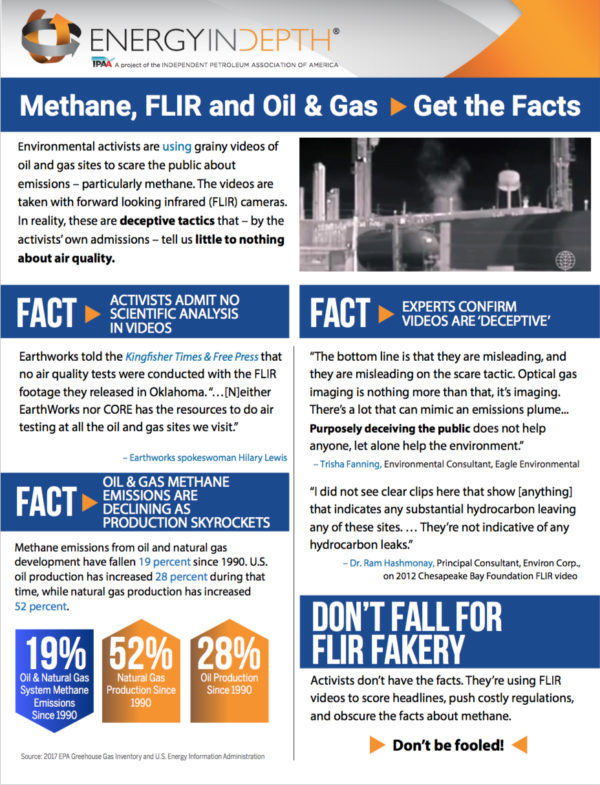 Earthworks has long used FLIR videos as a centerpiece of its “Keep It In the Ground” campaign. For example, FLIR videos and images are a key component of the group’s oft-recycled “Threat Maps” project, which is now being used as part of the group’s argument in support of costly and duplicative Environmental Protection Agency (EPA) and Bureau of Land Management (BLM) methane regulations.
But not only does scientific data refute Earthworks’ claims — the most recent EPA data show that oil and gas system methane emissions are decreasing as production skyrockets — Earthworks seemingly has no interest in producing reputable scientific data to support its claims despite having the resources to do so. Lewis even told the Times & Free Press:

“It is the regulator’s job to do air testing to make sure that these sites are in compliance with state and national rules. Unfortunately, neither EarthWorks nor CORE has the resources to do air testing at all the oil and gas sites we visit.”

As a recent Western Wire report confirms, Earthworks certainly does have the resources to conduct such testing, as it reported receipts of more than $2.4 million on its 2015 Form 990 report. And contrary to Lewis’ claim, regulatory agencies actually do not have the authority to conduct air testing; they instead have the authority to conduct audits to ensure companies are complying. That said, Eagle Environmental air compliance specialist Trisha Fanning, who has experience in Clean Air Act compliance as a third party auditor for clients in multiple industries, told Western Wire:

“The fact that (Earthworks) won’t test, there’s no defense to say what they’re saying. If they want to test and prove that it’s methane or another volatile organic compound, then do the test. Because we have to follow the lay of the law.”

Of course, why would Earthworks conduct air sampling when grainy black-and-white FLIR videos can make even the most benign emissions — such as steam or vapor —appear ominous and generate the media coverage these groups truly covet?
As Fanning told Western Wire, “There’s a lot that can mimic an emissions plume.” For instance, Fanning noted in a recent Western Energy Alliance video debunk of activist FLIR videos that the emissions displayed in the following still image from an Earthworks video isn’t methane at all. 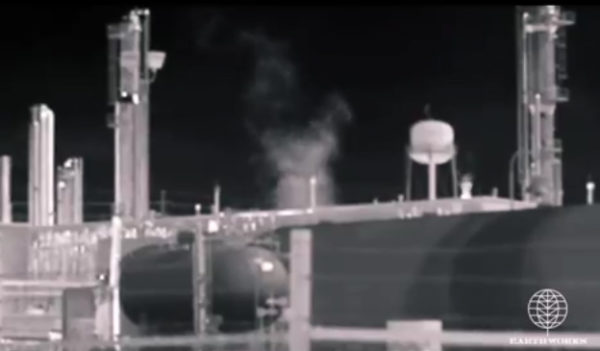 “In this video, it represents a lot of water vapor, a lot of steam coming off,” Fanning noted in the video.

The following infrared footage of a steaming tea kettle is another example of how steam can appear ominous when filmed using a FLIR camera. 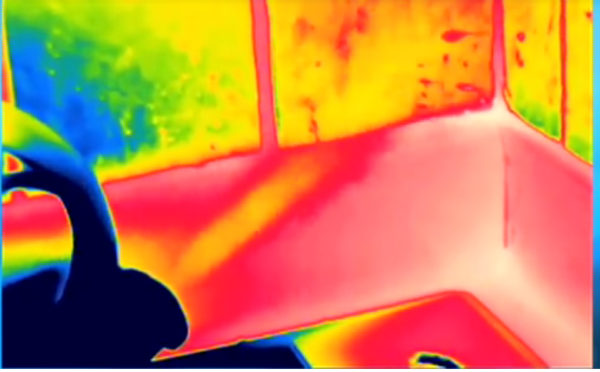 “Keep It in the Ground” activists have also falsely presented FLIR video of standard combustion exhaust at oil and gas facilities as being hydrocarbon emissions. The most prominent example is a 2011 video file released by the Chesapeake Bay Foundation (CBF). In the video, Cornell professor and noted anti-fracking researcher Robert Howarth claims the following still image demonstrates intentional venting of methane from an oil and gas facility. 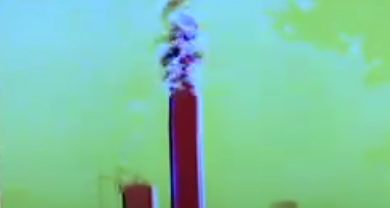 But Howarth’s claim was thoroughly debunked by Dr. Ram Hashmonay, who is credited with co-inventing modern radial plume mapping technology. Hashmonay explained in a 2012 EID videothat the characteristics of the plume pictured above demonstrate that it was in fact combustion exhaust — composed primarily of carbon dioxide and water vapor — rather than hydrocarbon venting. As Dr. Hashmonay told EID:

“I did not see clear clips here that show [anything] that indicates any substantial hydrocarbon leaving any of these sites. … They’re not indicative of any hydrocarbon leaks.”

“I’m not saying hydrocarbons are zero (in the plumes), but the levels are much lower than the detection of that camera.”

Hashmonay explained the distinct differences between hydrocarbon and combustion exhaust plumes in the EID video:

“When hydrocarbon gas is at the same temperature as the air around it can be visible in the sky background for a long distance downwind from the source. When you light it up, what you see is something very similar to a combustion source. You will see the hot plume coming off the gas grill and dissipate very quickly on the sky background.” 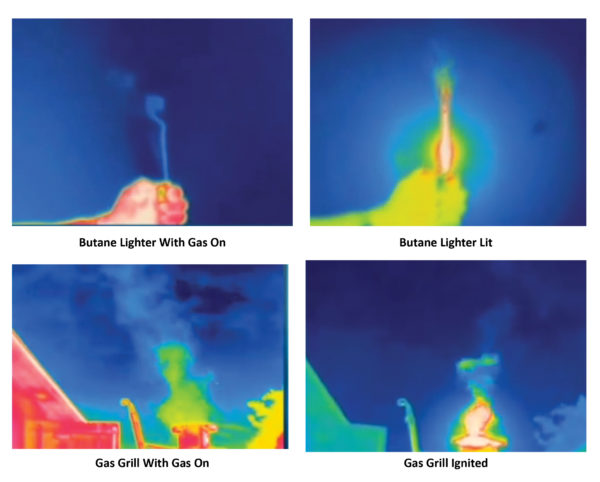 The unwillingness of activist groups such as Earthworks to conduct air sampling to corroborate claims made in reports featuring FLIR videos, of course, is part of their plan. After all, the intent of these videos is to frighten and mislead the public – not add clarity to the scientific argument. The above-listed blatant examples of harmless steam and combustion emissions being presented as methane emissions illustrates that fact clearly.
As Fanning told Western Wire,

“The bottom line is that they are misleading, and they are misleading on the scare tactic. Optical gas imaging is nothing more than that, it’s imaging,” she continued, saying that individuals without proper FLIR training and the understanding of many other variables could easily misinterpret what the camera sees.”

“Purposely deceiving the public does not help anyone, let alone help the environment.”